Survival of the Sickest: The Surprising Connections Between Disease and Longevity (Paperback) 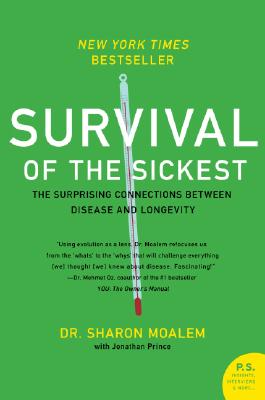 Survival of the Sickest: The Surprising Connections Between Disease and Longevity (Paperback)

Joining the ranks of modern myth busters, Dr. Sharon Moalem turns our current understanding of illness on its head and challenges us to fundamentally change the way we think about our bodies, our health, and our relationship to just about every other living thing on earth, from plants and animals to insects and bacteria.

So why does disease exist? Moalem proposes that most common ailments—diabetes, hemochromatosis, cystic fibrosis, sickle cell anemia—came into existence for very good reasons. At some point they helped our ancestors survive some grand challenge to their existence. Examining the evolution of man, Moalem reveals the role genetic and cultural differences have played in the health and well-being of various races, including their susceptibility to disease.

• Why African Americans living in the north might suffer from vitamin D deficiencies,

• Why Asians can’t drink as much alcohol as Europeans

Revelatory, utterly engaging, and timely—Moalem ponders strongN1, the emerging Avian Flu virus—Why Redheads Feel More Pain and Asians Can’t Drink will irrevocably change the way we think about our bodies and ourselves.

Dr. Sharon Moalem is an award-winning neurologist and evolutionary biologist, with a PhD in human physiology. His research brings evolution, genetics, biology, and medicine together to explain how the body works in new and fascinating ways. He and his work have been featured on CNN, in the New York Times, on The Daily Show with Jon Stewart, on Today, and in magazines such as New Scientist, Elle, and Martha Stewart's Body + Soul. Dr. Moalem's first book was the New York Times bestseller Survival of the Sickest. He lives in New York City.

Jonathan Prince was a senior adviser and speechwriter in the Clinton White House and oversaw communications strategy at NATO during the war in Kosovo. He was named one of America's Best and Brightest by Esquire in 2005 for his work to improve political advertising. With former U.S. senator John Edwards and Edwards's daughter Cate, Prince edited Home: The Blueprints of Our Lives.

“[It] will challenge everything you thought you knew about disease. Fascinating!” — Memet Oz, co-author of YOU: The Owners Manuel

MED History does not always receive a great deal of attention...this book shows exactly why it shouldn’t be ignored. — Library Journal

“fascinating, enlightening and reader-friendly...This is one not-to-be-missed fantastic journey across the evolutionary landscape of humankind. — Rocky Mountain News

“[a] fascinating new book...[Moalem] has a way of turning complicated biology into captivating stories.” — Body + Soul