None of the Above (Hardcover) 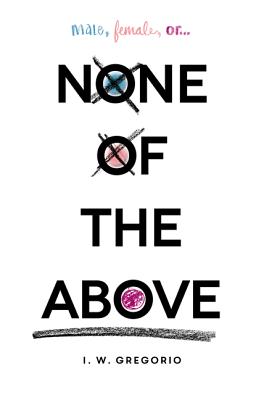 A groundbreaking story about a teenage girl who discovers she's intersex . . . and what happens when her secret is revealed to the entire school. Incredibly compelling and sensitively told, None of the Above is a thought-provoking novel that explores what it means to be a boy, a girl, or something in between.

What if everything you knew about yourself changed in an instant?

When Kristin Lattimer is voted homecoming queen, it seems like another piece of her ideal life has fallen into place. She's a champion hurdler with a full scholarship to college and she's madly in love with her boyfriend. In fact, she's decided that she's ready to take things to the next level with him.

But Kristin's first time isn't the perfect moment she's planned—something is very wrong. A visit to the doctor reveals the truth: Kristin is intersex, which means that though she outwardly looks like a girl, she has male chromosomes, not to mention boy "parts."

Dealing with her body is difficult enough, but when her diagnosis is leaked to the whole school, Kristin's entire identity is thrown into question. As her world unravels, can she come to terms with her new self?

I. W. Gregorio is a practicing surgeon by day, masked avenging YA writer by night. After getting her MD, she did her residency at Stanford, where she met the intersex patient who inspired None of the Above, her debut novel. She is also a founding member of the We Need Diverse Books team. A recovering ice hockey player, she lives in Pennsylvania with her husband and two children.

“None of the Above is a powerful story of discovering one’s true identity. This book will open hearts and change minds.” — Stephen Chbosky, bestselling author of The Perks of Being a Wallflower

“[A] provocative and enlightening first novel...will strike a familiar chord with any reader who has felt estranged.” — Publishers Weekly (starred review)

“I couldn’t put this book down—it opened my mind in ways that few books have done before.” — Jacqueline Woodson, award-winning author of Brown Girl Dreaming

“Like the beloved physician she is, I. W. Gregorio brings rare knowledge and acute empathy to the illumination of an anatomical difference—and to the teens who discover, in the nick of time, the saving grace of knowing and being one’s truest self. A book unlike any other.” — Beth Kephart, award-winning author of Going Over and Small Damages

“None of the Above is a sensitive, beautifully written story, told with heart (break) and humor. Gregorio deftly explores the isolation of being ‘other’ in a highly relatable way. Bravo!” — Kristin Elizabeth Clark, author of FREAKBOY

“None of the Above rises above most young adult fiction because it has potential to evoke significant change...[A] compelling and touching narrative.” — Voice of Youth Advocates (VOYA)

“[A] remarkable novel...Eye-opening and important.” — Booklist

“Kristin’s struggle with her identity is wrenching and authentically conveyed.” — Bulletin of the Center for Children’s Books