Painting the Light: A Novel (Hardcover) 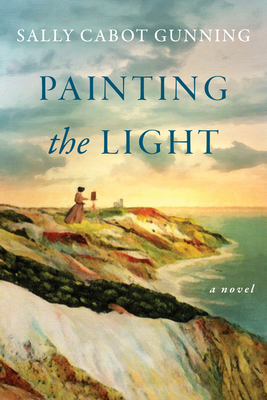 Ida Pease, a portrait painter from Boston, has moved to Martha’s Vineyard with her husband, Ezra, to live on a sheep farm. 1898 is a year of advances and independence for women. The year is full of new challenges for Ida, including discovering her husband isn’t the man she thought he was. This new historical novel from beloved Cape Cod author Sally Cabot Gunning is not to be missed.  ~ Eight Cousins, Summer Picks 2021

From the critically acclaimed author of Monticello and The Widow’s War comes a vividly rendered historical novel of love, loss, and reinvention, set on Martha’s Vineyard at the end of the nineteenth century.

Martha’s Vineyard, 1898. In her first life, Ida Russell had been a painter. Five years ago, she had confidently walked the halls of Boston’s renowned Museum School, enrolling in art courses that were once deemed “unthinkable” for women to take, and showing a budding talent for watercolors.

But no more. Ida Russell is now Ida Pease, resident of a seaside farm on Vineyard Haven, and wife to Ezra, a once-charming man who has become an inattentive and altogether unreliable husband. Ezra runs a salvage company in town with his business partner, Mose Barstow, but he much prefers their nightly card games at the local pub to his work in their Boston office, not to mention filling haystacks and tending sheep on the farm at home—duties that have fallen to Ida and their part-time farmhand, Lem. Ida, meanwhile, has left her love for painting behind.

It comes as no surprise to Ida when Ezra is hours late for a Thanksgiving dinner, only to leave abruptly for another supposedly urgent business trip to Boston. But then something unthinkable happens: a storm strikes and the ship carrying Ezra and Mose sinks.

In the wake of this shocking tragedy, Ida must settle the affairs of Ezra’s estate, a task that brings her to a familiar face from her past—Henry Barstow, Mose’s brother and executor. As she joins Henry in sifting through the remnants of her husband’s life and work, Ida must learn to separate truth from lies and what matters from what doesn’t.

Captured in rich, painterly prose—piercing as a coastal gale and shimmering as sunlight on the waves—Painting the Light is an arresting portrait of a woman, and a considered meditation on grief, persistence, and reinvention.

Sally Cabot Gunning lives in Brewster, Massachusetts, with her husband, Tom. A lifelong resident of New England, she is active in local historical organizations and creates tours that showcase the three-hundred-year history of her village. She is the author of three “Satucket novels” (The Widow’s War, Bound, and The Rebellion of Jane Clarke), as well as the historical novels Benjamin Franklin’s Bastard and Monticello.

"An atmospheric, character-driven story of a young woman’s struggle at the turn of the 20th century. . . . In Ida, Gunning has created a captivating personality. This is one that lingers well after the final page is turned." — Publishers Weekly

“Gunning vividly evokes the volatile weather rolling in off the Atlantic and the rustic farming life of the time. Hardships that are a sea-change from Ida’s privileged past are balanced with breathtaking natural beauty…As Ida deals with the dark weight of tragedy in her life and the mysteries [her husband] left behind, she experiences moments of disappointment and love, joy, and accomplishment. One constant is her thirst for independence as she learns the secret to painting the light and finding her place in the world.” — Booklist

“Ida Pease remains in the memory as the luminous portrait of a rebel outcast in the tradition of Thomas Hardy’s Bathsheba Everdine in Far from the Madding Crowd and Hester Prynne in Nathaniel Hawthorne’s The Scarlet Letter… But although life looks bleak for while, Ida’s growing intimacy with Martha’s Vineyard and her growing ability to capture its light-filled essence help her come to terms with the loss of her innocence and trust. Ultimately, she harvests both personal fulfillment and artistic sustenance from her new existence. In the process, she discovers infinite possibilities for her creative growth, which is immensely important not only for her development as an artist, but as an independent and creative woman in the modern age.”  — Historical Novel Society

“Sally Cabot Gunning’s compelling novel, Painting the Light, doesn’t just get the colors of Martha’s Vineyard right, but her prose gets every nuance in the complex relationships surrounding Ida, the protagonist.” — Martha’s Vineyard Times

“The author does a fine job developing characters, right down to the minor ones, giving the reader insight into the hard life of farming and an appreciation of dreams that might or might not be realized.”  — Jersey's Best

“If The Widow’s War identified Sally Gunning as a masterful new voice in historical fiction, Bound confirms her place as one of the very best in the field . . . Her Satucket novels are destined to become classics.”  — Geraldine Brooks, Pulitzer Prize–winning author

“[A] highly researched and gracefully presented novel . . . [with] both muscle and drive.” — Booklist on MONTICELLO

“[A] brilliant exploration. . . . Highly recommended as an engrossing tale of a strong woman in tumultuous times, with deftly interwoven historical details that make her trials all the more authentic.” — Library Journal on MONTICELLO

“Cabot shines in her descriptions of colonial life, in her fictionalized rendition of Ben Franklin’s charismatic personality and wide-ranging intellect, but especially in interpreting Franklin the man through Anne, a fully-realized, memorable character. It is Anne who brings imagined reality’s magic to the narrative. Intriguing historical fiction; a laudable interpretation of colonial life.” — Kirkus Reviews on BENJAMIN FRANKLIN'S BASTARD