In Defence of the Republic (Paperback) 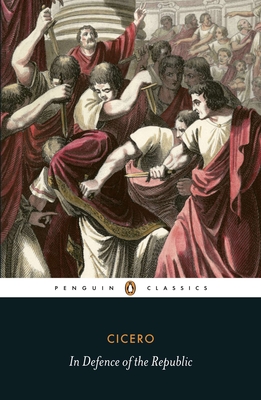 Cicero (106-43BC) was the most brilliant orator in Classical history. Even one of the men who authorized his assassination, the Emperor Octavian, admitted to his grandson that Cicero was: 'an eloquent man, my boy, eloquent and a lover of his country'. This new selection of speeches illustrates Cicero's fierce loyalty to the Roman Republic, giving an overview of his oratory from early victories in the law courts to the height of his political career in the Senate. We see him sway the opinions of the mob and the most powerful men in Rome, in favour of Pompey the Great and against the conspirator Catiline, while The Philippics, considered his finest achievements, contain the thrilling invective delivered against his rival, Mark Antony, which eventually led to Cicero's death.

Marcus Tullius Cicero (106-43 BC), Roman orator and statesman, was born at Arpinum to a wealthy local family. He was taken to Rome for his education with the idea of a public career and, by the year 70, he had established himself as the leading barrister in Rome. In the meantime, his political career was well under way and he was elected praetor in 66. In addition to his speeches, Cicero produced a large number of works on the theory and practice of rhetoric, on religion, and on moral and political philosophy. He was put to death in 43 BC. Siobhan McElduff is Assistant Professor of Latin Language and Literature at the University of British Columbia.