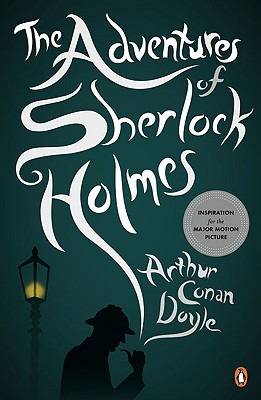 A new collection to coincide with the upcoming major motion picture starring Robert Downey, Jr., and Jude Law, Sherlock Holmes
This gripping collection includes many of the famous cases-and great strokes of brilliance-that made the leg-endary Sherlock Holmes one of fiction's most popular creations. With his devoted secretary, Dr. Watson, Holmes emerges from his smoke-filled rooms on Baker Street to grapple with the forces of treachery, intrigue, and evil in such cases as "The Speckled Band," in which a terrified woman begs Holmes and Watson's help in solv-ing the mystery surrounding her sister's death, and "A Scandal in Bohemia," which portrays a European king blackmailed by his mis-tress. A spine-tingling treat for anyone who loves a classic whodunit, The Adventures of Sherlock Holmes shows the inimitable detective at his best.

Sir Arthur Conan Doyle was born in Edinburgh in 1859. After nine years in Jesuit schools, he went to Edinburgh University, receiving a degree in medicine in 1881. He then became an eye specialist in Southsea, with a distressing lack of success. Hoping to augment his income, he wrote his first story, A Study in Scarlet. His detective, Sherlock Holmes, was modeled in part after Dr. Joseph Bell of the Edinburgh Infirmary, a man with spectacular powers of observation, analysis, and inference. Conan Doyle may have been influenced also by his admiration for the neat plots of Gaboriau and for Poe's detective, M. Dupin. After several rejections, the story was sold to a British publisher for 25, and thus was born the world's best-known and most-loved fictional detective. Fifty-nine more Sherlock Holmes adventures followed. Once, wearying of Holmes, his creator killed him off, but was forced by popular demand to resurrect him. Sir Arthur--he had been knighted for this defense of the British cause in his The Great Boer War--became an ardent Spiritualist after the death of his son Kingsley, who had been wounded at the Somme in World War I. Sir Arthur Conan Doyle died in Sussex in 1930.