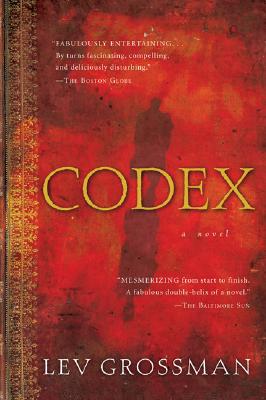 By Lev Grossman
$14.95
Currently not in store. Available to order. Usually Ships in 1-5 Days

About to depart on his first vacation in years, Edward Wozny, a hotshot young investment banker, is sent to help one of his firm's most important and mysterious clients. His task is to search their library stacks for a precious medieval codex, a treasure kept sealed away for many years and for many reasons. Enlisting the help of passionate medievalist Margaret Napier, Edward is determined to solve the mystery of the codex-to understand its significance to his wealthy clients, and to decipher the seeming parallels between the legend of the codex and an obsessive role-playing computer game that has absorbed him in the dark hours of the night.

The chilling resolution brings together the medieval and the modern aspects of the plot in a twist worthy of earning comparisons to novels by William Gibson and Dan Brown, not to mention those by A. S. Byatt and Umberto Eco. Lev Grossman's Codex is a thriller of the highest order.

Lev Grossman was born in Massachusetts in 1969 and studied literature at Harvard and Yale. He is a writer and book critic for Time Magazine. He has written feature articles for Salon, Lingua Franca, Entertainment Weekly, Time Out New York and The Village Voice, and was previously the producer of timedigital.com, Time magazine's personal technology website. He lives in Brooklyn.

PRAISE FOR CODEX
"A genuine treat, with its sneaky plot and richly textured storytelling. Moves so fast that readers won't realize how smart it is." -SAN FRANCISCO CHRONICLE

"Takes its place on the shelf of self-referential, bibliophilic page-turners like The Name of the Rose, Possession and A Case of Curiosities, and it's as entertaining as any of them."
-THE NEW YORK TIMES BOOK REVIEW

"An exhilarating literary tour de force … mesmerizing from start to finish. A fabulous double-helix of a novel."
— Baltimore Sun

"Alluring and meticulous. Replete with a sexy duchess, a jaded academic ... and a shadowy programmer."
— Entertainment Weekly

"Plays around with narrative in classic postmodern fashion."
— Salon

"A genuine treat with its sneaky plot and richly-textured storytelling. Moves so fast you won't realize how smart it is."
— San Francisco Chronicle

"Takes its place on the shelf of bibliophilic page-turners like Name of the Rose and Possession. Such a good story."
— The New York Times Book Review

"Transcends the current vogue for the archaic--linking the 14th and 21st centuries by considering the powers of parchment and PlayStation."
— The Village Voice