The Road To Wigan Pier (Paperback) 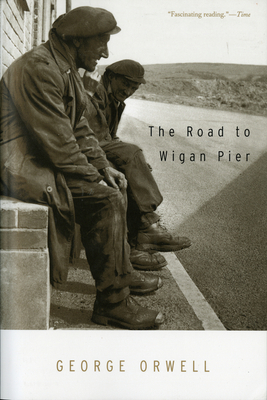 The Road To Wigan Pier (Paperback)


Currently not in store. Available to order. Usually Ships in 3-7 Days
Before he authored the dystopian 1984 and the allegorical Animal Farm, George Orwell was a journalist, reporting on England's working class — an investigation that led him to examine democratic socialism. In the 1930s, the Left Book Club, a socialist group in England, sent George Orwell to investigate the poverty and mass unemployment in the industrial north of England. Once there, he went beyond the requests of the book club, to investigate the employed as well. Orwell chose to live as the coal miners did — sleeping in foul lodgings, subsisting on a meager diet, struggling to feed a family on a dismal wage, and going down into the hellish, backbreaking mines. What Orwell saw clarified his feelings about socialism, and in The Road to Wigan Pier, he pointedly tells why socialism, the only remedy to the shocking conditions he had witnessed, repelled "so many normal decent people." "Orwell's code was a simple one, based on truth and 'deceny'; he was important — and original — because he insisted on applying that code to his own Socialist comrades as well as to the class enemy...It is the best sociological reporting I know."—The New Yorker

GEORGE ORWELL (1903–1950) was born in India and served with the Imperial Police in Burma before joining the Republican Army in the Spanish Civil War. Orwell was the author of six novels, including 1984 and Animal Farm, as well as numerous essays and nonfiction works.