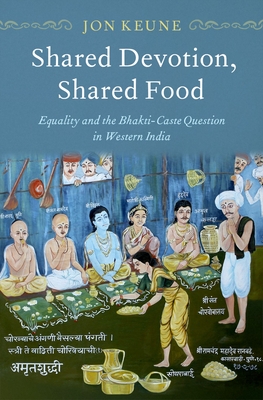 
Currently not in store. Available to order. Usually Ships in 3-7 Days
When Hindu devotional or bhakti traditions welcomed marginalized people-women, low castes, and Dalits-were they promoting social equality? In this book, Jon Keune deftly examines the root of this deceptively simple question. The modern formulation of the bhakti-caste question is what Dalit
leader B. R. Ambedkar had in mind when he concluded that the saints promoted spiritual equality but did not transform society. While taking Ambedkar's judgment seriously, Jon Keune argues that, when viewed in the context of intellectual history and social practice, the bhakti-caste question is more
complex. Shared Devotion, Shared Food explores how people in western India wrestled for centuries with two competing values: a theological vision that God welcomes all people, and the social hierarchy of the caste system. Keune examines the ways in which food and stories about food were important sites where
this debate played out, particularly when people of high and low social status ate together. By studying Marathi manuscripts, nineteenth-century publications, plays, and films, Shared Devotion, Shared Food reveals how the question of caste, inclusivity, and equality was formulated in different ways
over the course of three centuries, and it explores why social equality remains so elusive in practice.

Jon Keune is Assistant Professor of Religious Studies at Michigan State University. He held postdoctoral fellowships in Houston and G�ttingen, and he earned a PhD from Columbia University. His research focuses on religion, society, and history in India and with a comparative eye to central Europeand East Asia. As co-founder of the Regional Bhakti Scholars Network in 2013, he is also deeply involved in collaborative research.