Gilgamesh: A New Translation of the Ancient Epic (Paperback) 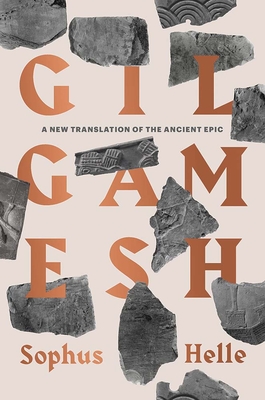 Gilgamesh: A New Translation of the Ancient Epic (Paperback)


Currently not in store. Available to order. Usually Ships in 3-7 Days
A poem for the ages, freshly and accessibly translated by an international rising star, bringing together scholarly precision and poetic grace

“Looks to be the last word on this Babylonian masterpiece.”—Michael Dirda, Washington Post

Gilgamesh is a Babylonian story about love between men, loss and grief, the confrontation with death; the destruction of nature; insomnia and restlessness, finding peace in one’s community, the voice of women, the folly of gods, heroes, and monsters—and more. Translating directly from the Akkadian, Sophus Helle offers a literary translation that reproduces the original epic’s poetic effects, including its succinct clarity and enchanting cadence. Millennia after its composition, Gilgamesh continues to speak to us in myriad ways.
Sophus Helle is currently a postdoctoral researcher at Freie Universität Berlin. He previously translated Gilgamesh into Danish with his father, the poet Morten Søndergaard.
“Looks to be the last word on this Babylonian masterpiece.”—Michael Dirda, Washington Post

“Lively, earthy, and scrupulous in its scholarship.”—Robert Macfarlane, New York Review of Books

“There is an echo between the story in Gilgamesh and the story of Gilgamesh, that I find deeply moving. The epic is, in part, about the power of knowledge. Gilgamesh, we are told, . . . found some ancient kernel of knowledge—a lesson, incidentally, about immortality—and gave it a new life. And by engaging with the epic several millennia after it was lost, you can too.”—Tim Murphy, Mother Jones, “The Books We Needed in 2022”

“Sophus Helle’s new translation . . . [is] a thrilling, enchanting, desperate thing to read, moving from questing adventure to surging grief and the confrontation with the reality of death. . . . With a clear-eyed and informative introduction and five essays that provide context and insight into the epic, the book Helle has made feels both magic and deeply, lastingly human.”—Nina MacLaughlin, Boston Globe

“In Sophus Helle’s brilliant new translation of the Gilgamesh epic, an ancient text hailed by Wai Chee Dimock as ‘speaking to our mortal loves and fears with undying force,’ readers have a timely opportunity to reconsider a masterpiece of world literature that is also a sobering portent of the Anthropocene.”—Daniel Simon, World Literature Today

“[Helle’s] translation is the most direct and literal yet, pulled directly from the cuneiform for an audience of literary scholars and general readers.”—Soren Chang, Journal of the Core Curriculum

“With expertise and passion invites the non-specialist reader to engage with this relic of Mesopotamian culture as an appealing work of world literature. . . . The Epic of Gilgamesh is a story that ended long ago but has been brought back to life by valiant and creative efforts such as this one.”—Benjamin R. Foster, Bulletin of the School of Oriental and African Studies

“The translation is elegant and eloquent. The essays and elucidations are learned, lively, and hugely illuminating. Sophus Helle is a poet, a scholar, and, if truth be told, a genius.”—Marshall Brown, University of Washington

“Helle’s new translation reminds us just what a miracle it is that Gilgamesh has survived, an emblem of mortality available only in fragments, yet speaking to our mortal loves and fears with undying force.”—Wai Chee Dimock, Yale University

“A dazzling work of scholarship that manages complex topics with elegance and thoughtfulness.”—Louise Pryke, University of Sydney

“A fresh and vital translation, alive to the music of the original, and accompanied by essays offering crucial background and insightful analysis, Helle’s Gilgamesh will bring the ancient poem to life for new audiences.”—Alexander Beecroft, University of South Carolina