The Last Best League: One Summer, One Season, One Dream (Paperback) 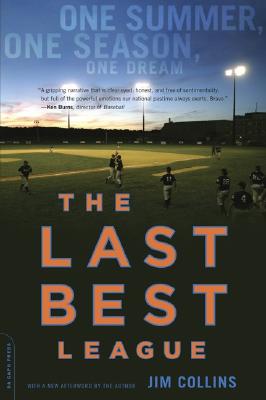 Every summer, in ten small towns across Cape Cod, the finest college baseball players in the country gather in hopes of making it to The Show. The hopes are justifiably high: The Cape Cod Baseball League is the best amateur league in the world, producing one out of every six major league players, from Nomar Garciaparra and Frank Thomas to Jeff Bagwell and Barry Zito.Jim Collins chronicles a season in the life of one teamthe Chatham A's, perhaps the most celebrated team in the league. Set against the backdrop of a resort town on the bend of the outer Cape, the story charts the changing fortunes of a handful ?of players battling slumps and self-doubt in their effort to make the league playoffs and, more importantly, impress the major league scouts.We learn about everything from the physics of wooden bats and the physiology of elbows to the psychology of slumps and the lure of drugs. In the course of a single dramatic season, with euphoric wins and devastating losses, we come to know the intricacies of the major league scouting network and the rapidly changing profile of major league baseball.In the tradition of The Boys of Summer, The Last Best League is about dreams fulfilled and dreams denied, about Cape Cod and the rites of summer, and about the way one small town grows to love a group of young men coming of age in America.

Jim Collins is former editor of Yankee magazine, a native New Englander, and a former college baseball player at Dartmouth. To research The Last Best League, he relocated his family from New Hampshire to Chatham, Massachusetts, attended every game, and was given complete insider's access to the team and players. He is an accomplished magazine writer whose work has twice been included in Best American Sportswriting.

Fuel Baseball magazine, Spring 2010
“In the tradition of The Boys of Summer, The Last Best League is about dreams fulfilled and dreams denied; it’s about Cape Cod and the rites of summer; and about the way one small town grows to love a group of young men coming of age in America.”