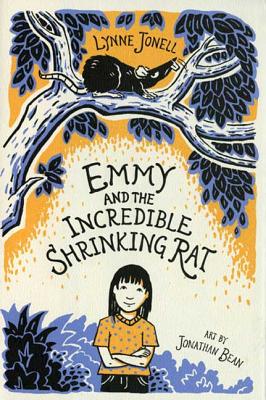 Emmy was a good girl. At least she tried very hard to be good. She did her homework without being told. She ate all her vegetables, even the slimy ones. And she never talked back to her nanny, Miss Barmy, although it was almost impossible to keep quiet, some days.

She really was a little too good. Which is why she liked to sit by the Rat. The Rat was not good at all . . .

Lynne Jonell is the author of the novels Emmy and the Incredible Shrinking Rat, Emmy and the Home for Troubled Girls, and The Secret of Zoom, as well as several critically acclaimed picture books. Her books have been named Junior Library Guild Selections and a Smithsonian Notable Book, among numerous other honors. Born in Little Falls, Minnesota, Jonell grew up in a suburb of Minneapolis. She now teaches writing at the Loft Literary Center and lives with her husband and two sons in Plymouth, Minnesota, in a house on a hill.

JONATHAN BEAN received an M.F.A. from New York's School of Visual Arts and now lives in Harrisburg, Pennsylvania. A two-time winner of the Boston Globe-Horn Book Award, for At Night and Building Our House, he is also the illustrator of Big Snow, two picture books by Lauren Thompson, and Bad Bye, Good Bye by Deborah Underwood.

“A droll fantasy with an old-fashioned sweep and a positively cinematic cast.” —Publishers Weekly, starred review

“A mystery is cleverly woven into this fun and, at times, hilarious caper, and children are likely to find themselves laughing out loud . . . a delightful read.” —School Library Journal, starred review

“Fun and funny, this fast-paced page turner appropriately begins and ends with the unforgettable Rat in an acrobatic flip-book feature.” —Kirkus Reviews