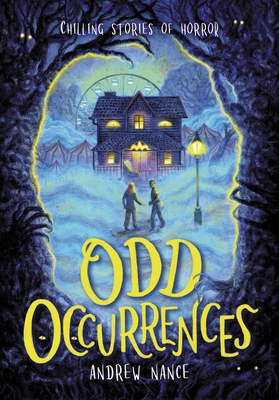 
On Our Shelves Now Online inventory updates every 24 hours. Call 508.548.5548 to verify.
Two best friends.  One goes missing.  And a paranormal podcast that hopes to reunite them, but not before unleashing horror in many forms.

When Zeus’s best friend gets trapped inside the House of Mystery and Mirrors at Carnival Nocturne, Tobin’s existence is erased from the world, and Zeus is the only person who remembers that his best friend ever lived. Zeus is determined to return to the carnival and rescue his friend—that is, if he can only find it.

Together with Tobin’s sister, Jana, Zeus concocts a plan to conjure Tobin’s captors on Halloween night via his paranormal podcast, Odd Occurrences. Listeners are invited to call in and share their supernatural experiences with the audience. From ghostly encounters to haunted dolls, terrifying escape rooms with deadly consequences to alien lake creatures, Zeus hopes that someone’s story will produce a clue that leads him to the mysterious carnival—and ultimately, back to Tobin. But little does Zeus know that Tobin is almost out of time.

Andrew Nance had a twenty-five-year career as a morning radio DJ. Today, he spends his time writing and acting onstage in historic St. Augustine, Florida, where he lives with his family. He is the author of Daemon Hall and Return to Daemon Hall: Evil Roots.