You Are Here: Around the World in 92 Minutes: Photographs from the International Space Station (Hardcover) 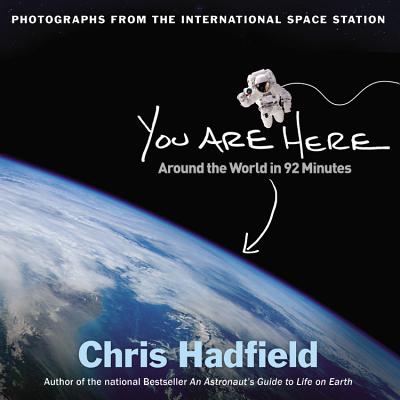 You Are Here: Around the World in 92 Minutes: Photographs from the International Space Station (Hardcover)


Email or call for price.
Divided by continent, You Are Here represents one (idealized) orbit of the ISS. This planetary photo tour -- surprising, playful, thought-provoking, and visually delightful -- is also punctuated with fun, fascinating commentary on life in zero gravity. In the spirit of his bestselling An Astronaut's Guide to Life on Earth, You Are Here opens a singular window on our planet, using remarkable photographs to illuminate the history and consequences of human settlement, the magnificence (and wit) of never-before-noticed landscapes, and the power of the natural forces shaping our world and the future of our species.
Chris Hadfield, one of the world's most seasoned and accomplished astronauts, is the author of the #1 international bestseller An Astronaut's Guide to Life on Earth. The top graduate of the U.S. Air Force Test Pilot School in 1988 and the U.S. Navy Test Pilot of the Year in 1991, Hadfield was selected to be an astronaut in 1992. He was Chief CAPCOM at NASA for twenty-five shuttle missions and served as Director of Operations for NASA in Star City, Russia, from 2001 to 2003; Chief of Robotics for the NASA Astronaut Office in Houston from 2003 to 2006; and Chief of International Space Station Operations for the NASA Astronaut Office from 2006 to 2008.

Hadfield most recently served as Commander of the International Space Station, where, while conducting a record-setting number of scientific experiments and overseeing an emergency spacewalk, he gained worldwide acclaim for his breathtaking photographs and educational videos about life in space. His online videos, including a zero-gravity version of David Bowie's "Space Oddity," have collectively received more than fifty million views.
One of Space.com's Best Space Photography Books

"Is there a person left on the internet who hasn't yet swooned over astronaut Chris Hadfield's jaw-dropping images from space? Here's a chance to have them in your home.... While we've seen plenty of NASA images of our planet, Hadfield's instantly feel more personal. These photos were taken by a curious human, not as part of a larger organizational mandate. Hadfield was capturing his photos not necessarily as a scientist, but more as a zero-gravity sightseer on behalf of all civilization."—Alissa Walker, Gizmodo

"You Are Here ... offers readers a magnificent photographic view of something very familiar: Earth."—Sarah Gray, Salon

"Awe-inspiring photos... Sprinkled among the pictures are Hadfield's fun factoids about life without gravity."—Parade

"A photographic exploration of the planet, a series of spectacular images snapped from the International Space Station."—David Martindale, Dallas Morning News

"A visually stunning tour of Earth.... Breathtaking photos."—CBS This Morning

"The photos are fascinating, and Hadfield's commentary is by turns insightful and playful, revealing deforestation on one page, and landforms that resemble ears on another. A sure hit for fans of photography, cartography, geography or space travel."—Wendy Sawatzky, Winnipeg Free Press

"The book is incredibly well designed, with a visually interesting mix of typography and layouts....It is sure to capture the attention of adults and kids, and evoke a sense of wonder about our beautiful but slightly banged up rock we call home."—Ariane Coffin, GeekMom

"This planetary photo tour-surprising, playful, thought-provoking, and visually delightful-is also punctuated with fun, fascinating commentary on life in zero gravity.... You are Here opens a singular window on our planet, using remarkable photographs to illuminate the history and consequences of human settlement, the magnificence of newly uncovered landscapes, and the power of the natural forces shaping our world and the future of our species."—Alan Petrucelli, Examiner.com

"Chris Hadfield sorted through his thousands of snaps from 2,500 trips around the Earth and, with an unending sense of wonder, brings you the best."—Adele Peters, Fast Company

"Striking, abstract views of Earth alongside something familiar."—Megan Gannon, Space.com