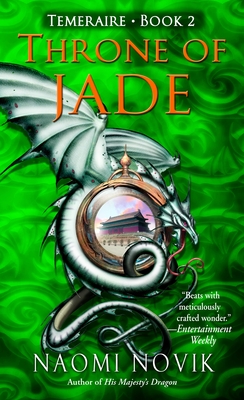 This is book number 2 in the Temeraire series.

In the second novel of the New York Times bestselling Temeraire series, the Napoleonic Wars take Captain Will Laurence and his dragon to China on a perilous mission.

When Britain intercepted a French ship and its precious cargo—an unhatched dragon's egg—Captain Will Laurence of HMS Reliant unexpectedly became master and commander of the noble dragon he named Temeraire. As new recruits in Britain’s Aerial Corps, man and dragon soon proved their mettle in daring combat against Napoleon Bonaparte’s invading forces.

Now China has discovered that its rare gift, intended for Napoleon, has fallen into British hands—and an angry Chinese delegation vows to reclaim the remarkable beast. A reluctant Laurence has no choice but to take Temeraire back to China—a long voyage fraught with peril, intrigue, and the untold terrors of the deep. Yet once the pair reaches the court of the Chinese emperor, even more shocking discoveries and darker dangers await.

“Readers with a penchant for both Patrick O’Brian and Anne McCaffrey may have found their perfect match. Naomi Novik beautifully renders an 1800s Europe in which naval buffs and dragon lovers will be keen to immerse themselves.”—Alan Dean Foster, author of the Pip & Flinx series

Don’t miss any of Naomi Novik’s magical Temeraire series
HIS MAJESTY’S DRAGON • THRONE OF JADE • BLACK POWDER WAR • EMPIRE OF IVORY • VICTORY OF EAGLES • TONGUES OF SERPENTS • CRUCIBLE OF GOLD • BLOOD OF TYRANTS • LEAGUE OF DRAGONS
Naomi Novik is the New York Times bestselling author of A Deadly Education, The Last Graduate, and The Golden Enclaves, the award-winning novels Uprooted and Spinning Silver, and the Temeraire series. She is a founder of the Organization for Transformative Works and the Archive of Our Own. She lives in New York City with her family and six computers.
Praise for His Majesty’s Dragon and the Temeraire series

“These are beautifully written novels—not only fresh, original, and fast paced, but full of wonderful characters with real heart. [The Temeraire series] is a terrific meld of two genres that I particularly love—fantasy and historical epic.”—Peter Jackson

“A terrifically entertaining fantasy novel . . . Is it hard to imagine a cross between Susanna Clarke, of Norrell and Strange fame, and the late Patrick O’Brian? Not if you’ve read this wonderful, arresting novel.”—Stephen King

“A splendid series . . . Not only is it a new way to utilize dragons, it’s a very clever one and fits neatly into the historical niche this author has used.”—Anne McCaffrey

“Just when you think you’ve seen every variation possible on the dragon story, along comes Naomi Novik. Her wonderful Temeraire is a dragon for the ages.”—Terry Brooks

“A completely authentic tale, brimming with all the detail and richness one looks for . . . as well as the impossible wonder of gilded fantasy.”—Entertainment Weekly (Editor’s Choice, Grade: A)

“Novik has accomplished something singular with her Temeraire series. . . . At its heart, it’s a story about friendship that transcends not only time and class, but species.”—NPR

“[Naomi Novik] is soaring on the wings of a dragon.”—The New York Times

“An amazing performance . . . [I] was immediately hooked by the writing, the research and the sheer courage of the whole enterprise.”—Chicago Tribune

“Novik’s influences run the gamut from Jane Austen to Patrick O’Brian, with a side trip through Anne McCaffrey. Her books are completely involving and probably addictive, their central conceit explored in clever detail with a great deal of wit and historical insight.”—San Francisco Chronicle

“Something new and quite wonderful . . . The Temeraire trilogy could well be this year’s Jonathan Strange and Mr. Norrell.”—BookPage

“A superbly written, character-driven series . . . What keeps one turning the pages is the urge to find out what happens next to Captain Laurence and Temeraire, characters who win one’s heart from the beginning. Bravo!”—Booklist (starred review)