Down From The Mountain: The Life and Death of a Grizzly Bear (Paperback) 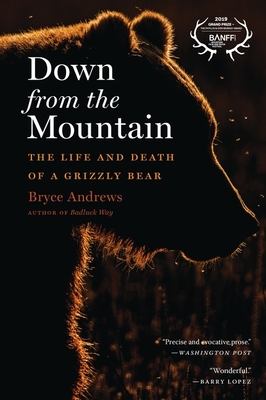 Down From The Mountain: The Life and Death of a Grizzly Bear (Paperback)


Currently not in store. Available to order. Usually Ships in 3-7 Days
The story of a grizzly bear named Millie: her life, death, and cubs, and what they reveal about the changing character of the American West.

An "ode to wildness and wilderness" (Outside Magazine), Down from the Mountain tells the story of one grizzly in the changing Montana landscape.

Millie was cunning, a fiercely protective mother to her cubs. But raising those cubs in the mountains was hard, as the climate warmed and people crowded the valleys.

There were obvious dangers, like poachers, and subtle ones, like the corn field that drew her into sure trouble. That trouble is where award-winning writer, farmer, and conservationist Bryce Andrews's story intersects with Millie’s.

In this "welcome and impressive work" he shows how this drama is "the core of a major problem in the rural American West—the disagreement between large predatory animals and invasive modern settlers”—an entangled collision where the shrinking wilds force human and bear into ever closer proximity (Barry Lopez).

“Andrews’s wonderful Down from the Mountain is deeply informed by personal experience and made all the stronger by his compassion and measured thoughts . . . Welcome and impressive work.”—Barry Lopez

Bryce Andrews is the author of Down from the Mountain, which won the Banff Mountain Book Competition and was a Montana Book Award Honor Title and an Amazon Best Science Title of 2019. His first book was Badluck Way, which won the Barnes & Noble Discover Great New Writers Award, the Reading the West Book Award for nonfiction, and the High Plains Book Award for both nonfiction and debut book. Andrews grew up in Seattle, Washington, and spent a decade working on ranches in the high valleys of Montana. He lives near Missoula with his family.

Praise for Down from the Mountain Grand Prize Winner of the Banff Mountain Book Competition  Montana Book Award Honor Title  An Amazon Best Science Title of 2019  A Literary Hub Most Anticipated Title of 2019 An EcoWatch Best Book of April  A Missoulian Best Book of April A Chicago Review of Books Best Book of April   "The two sides of Bryce Andrews — enlightened rancher and sensitive writer — appear to make a smooth fit...Precise and evocative prose."  —Washington Post   "Andrews’s writing about wilderness is much like that of author Rick Bass, who displays both a healthy reverence for ecology and an easy way of talking about it. This story is not just about Andrews’s shift from rancher to conservationist. It’s an ode to wildness and wilderness in the form of grizzlies. It’s about the tightrope bears walk between living in their mountainous territory, consuming pine nuts, army cutworm moths, and winterkill, versus coming down the mountain to scavenge in human territory. It’s about the resulting relationship between humans and grizzlies when they live in close proximity."  —Outside   "[A] soulful new exegesis on ursid-hominid relations...Down From The Mountain showcases a writer whose talents have fully matured...Down From the Mountain belongs in the pantheon of contemporary conservation writing. It is easy to forget, when arguing over the fate of wildlife, that populations are composed of thinking, feeling individuals; in his sensitive treatment of an ill-fated ursid, Andrews breaches the fences that guard our compassion."  —Ben Goldfarb, High Country News   “Bryce Andrews’ wonderful Downfrom the Mountain is deeply informed by personal experience and made all the stronger by his compassion and measured thoughts. He outlines clearly the core of a major problem in the rural American West—the disagreement between large predatory animals and invasive modern settlers—without disrespect and without sentimentality. His book is welcome and impressive work.”  —Barry Lopez   “In some of the clearest prose the state of Montana has produced, this high-octane story captures the marvel that is a grizzly giving birth in the high wild, follows her down into the human interface, and floods us with the heightened awareness and humbling unease we feel in the presence of Ursus arctos. When the hubris of man-unkind then threatens his protagonists, Andrews lays his life on the line in a sustained attempt to protect them, and the suspense of the telling comes to rival a great crime thriller. Rife with lyrical precision, first-hand know-how, ursine charisma, and a narrative jujitsu flip that places all empathy with his bears, Down from the Mountain is a one-of-a-kind triumph even here in the home of Doug Peacock and Douglas Chadwick.”  —David James Duncan, author of The River Why and The Brothers K   "Would that we had more nature writing like Bryce Andrews’s fantastic second book, Down from the Mountain. Part biography of the Mission Valley in Montana, informed by the Blackfeet and Salish histories rooted there, it tells a moving modern tale of how ranchers and big predators overlap uneasily on that land today...Down from the Mountain eschews easy moral scrimmaging...A subtle and beautifully unexpected book...Readers hungry for yet another torch bearer to the ways of thinking of the wild that Barry Lopez and Leslie Marmo —