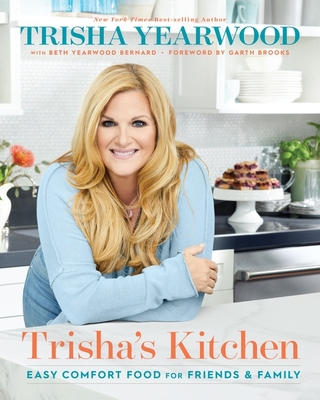 125 comfort food recipes and family favorites that are simple to prepare and will bring loved ones together, plus fun family stories and photos, from country music star, Food Network star, and #1 best-selling author Trisha Yearwood

Trisha Yearwood’s fans know that she can cook up a comforting, delicious meal that will feed a family! Like her earlier bestsellers, Trisha’s Kitchen will include new family favorites and easy-to-make comfort foods, with stories about her family and what’s really important in life.

The 125 recipes include dishes her beloved mother used to make, plus new recipes like Pasta Pizza Snack Mix and Garth's Teriyaki Bowl. Every recipe tells a story, whether it's her grandma's Million Dollar Cupcakes, or her Camo Cake that she made for her nephew's birthday.

As Trisha says: "I love to cook now more than I ever have, because for me, cooking is about love. It's sharing a meal with family and friends and talking about our lives. It's working out thoughts in my head about what I need to conquer or accomplish while I'm working on a homemade pastry crust. Sometimes the feel of cold butter in my hands working through the flour just makes me see things more clearly."

Trisha Yearwood’s spirit shines just as brightly in her cooking as it does in her music. Whether she’s under the glow of a spotlight or in the heat of the kitchen, the same curiosity, care, and passion drive her. Establishing herself as a respected culinary voice, the singer, actress, author, chef, personality, and entrepreneur has delivered two #1 cookbooks on the New York Times Bestseller list—Georgia Cooking in an Oklahoma Kitchen [2008] and Home Cooking with Trisha Yearwood [2010]. During 2012, she welcomed viewers right by her side on Trisha’s Southern Kitchen. The hit Food Network series garnered an EMMY® Award in the category of “Outstanding Culinary Show.” The Facebook Live “pre-show,” T’s Coffee Talk, remains a fan favorite as well. She also returned to the New York Times Bestseller list with her 2015 cookbook Trisha’s Table. Not to mention, she teamed up with Williams Sonoma for her signature best-selling cocktail mixes and released a bevy of delicious food products, including her own biscuit mix and even a complete Thanksgiving Dinner. In 2021, she shares what might be her most personal cookbook yet, Trisha’s Kitchen: Easy Comfort Food for Friends and Family. It collects 125 comfort food recipes peppered with unforgettable family stories and photos.
Simultaneously, Trisha continues to warm hearts worldwide as a celebrated country star. In addition to chart-topping multiplatinum success, she has received numerous GRAMMY®, CMA® and ACM® Awards. Most recently, 2019’s Every Girl earned widespread critical acclaim and marked her eighth Top Five debut on the Billboard Top Country Albums Chart. With dozens of hits, hundreds of recipes, and countless stories, Trisha Yearwood remains the complete renaissance woman, shining her light in every arena.