This Is Not A Pity Memoir (Hardcover) 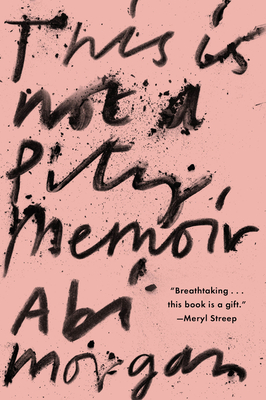 What happens when your partner of twenty years suddenly believes you’re nothing but a stranger?

What do you do when your history together is gone?

How do you prove you’re not an imposter in your own life?

When the partner of Emmy Award–winning screenwriter Abi Morgan abruptly collapsed from a mysterious illness, doctors were concerned that he would not survive. Then, six months later, Jacob woke from his coma, to the delight and relief of his family and friends—except this proved to be anything but a Hollywood ending. Because to Jacob, the woman standing at his bedside, who had cared for him all these months, was not his partner. Not his children’s mother. Not the woman he loved. Sure, she looked like his Abi, but this was an imposter, living someone else’s life.

Finding herself dropped into a real-life night-mare seemingly ripped from the pages of a thriller, Abi must find a way to hang on to not only their past but also their future together, before it slips away from them both. With grace, an irresistible sense of humor and refreshingly raw honesty, This Is Not a Pity Memoir grapples with a journey through fear and redemption few should have to face.

What do you do when you are losing your love?

You don’t write a pity memoir.

You write a love story.

ABI MORGAN is a playwright and screenwriter. Her plays include Skinned, Sleeping Around, Splendour (Paines Plough), Tiny Dynamite (Traverse), Tender (Hampstead Theatre), Fugee (National Theatre), 27 (National Theatre of Scotland), Love Song (Frantic Assembly), and The Mistress Contract (Royal Court Theatre). Her television work includes My Fragile Heart, Murder, Sex Traffic, Tsunami – The Aftermath, White Girl, Royal Wedding, Birdsong, The Hour, River, and The Split. Her film writing credits include Brick Lane, Iron Lady, Shame, The Invisible Woman, and Suffragette. She has a number of films currently in development. Morgan has won a number of awards including Baftas and an Emmy for her film and TV work.

"With her trademark deadpan, trenchant wit, and a deeply soulful mindfulness, Abi Morgan takes a breathtaking hike on the cliff edge of a life upended by illness. By turns harrowing, cracking sharp and heartbreaking, it is...comforting to accompany someone with her sense of humor and the absurd on this trip- (this) book is a gift to anyone who has been similarly unmoored by fate and the furies.” — Meryl Streep

“A profound look at the complexities of love, even at its most mundane. Equal parts savage and sublime, this obliterates notions of memory and intimacy with grace and precision….[A] raw and incandescent debut.”  — Publishers Weekly (starred review)

"Morgan doesn’t, to put it mildly, go in for self-pity. Her book, even when things are at their most bleak, is both very funny and as propulsive as a thriller, ticking along in an adrenalised real time, impossible to put down."  — The Guardian

"In This Is Not a Pity Memoir, the talented screenwriter welcomes readers into her world. With authenticity, she writes with a refreshing sense of honestly, frustration, and hope." — Shondaland

"There are no words. I was stunned, in every sense, by this heart-breaking, profound and deeply human memoir. Like CS Lewis on grief, Morgan finds truth and beauty in the darkest places. I feel changed by this book. I will never forget it." — Meg Mason, author of Sorrow & Bliss

"From the very first line I couldn’t stop reading. Abi invites you in to what feels almost like a thriller, then quickly a heart bursting romantic comedy and a devastating drama. Even if this was fiction it would be impossible to stop thinking about this book long after reading. The fact that this is Abi’s real life experience brought forth as this astonishing piece of writing is truly breathtaking. It’s arrestingly honest, funny, profound and exquisitely written. I could not have loved it more."  — Carey Mulligan

“A candid, intimate memoir of a harrowing time.” — Kirkus Reviews

"Abi Morgan (Tiny Dynamite), an Emmy-winning British writer for film (The Iron Lady) and television (The Hour), knows good copy when she sees it. She also knows better than to reach for clichés. This Is Not a Pity Memoir is a tragedy chronicle whose success lies in the author's resolutely bromide-free treatment of the harrowing circumstances she lived through." — Shelf Awareness (Starred Review)

“A mash-up of all the things I love in a book – honesty, comedy, pathos and what- happens-next. It’s brutal – in a good way – but above all else it’s a testament to kindness, stickability and enduring love.”  — Kit de Waal

"One of Britain’s finest screenwriters, Morgan writes  a very moving story about tragedy without ever becoming sentimental. A gripping read." — Bloomberg News

"(This Is Not A Pity Memoir) is a brutally honest autobiography of the catastrophic last few years of her life, when her husband, Jacob, suffered a brain seizure and went into a coma and she simultaneously was diagnosed with a particularly aggressive form of breast cancer. What does this have to do with history, you might ask. Everything, as it happens." — Andrew Keen for Literary Hub

"In this emotional memoir, Morgan poetically writes about her husband’s long illness, her own battle with breast cancer, and how she learned to hang on to what matters most. Beautifully weaving the past with the present, she reveals the deep truths and challenging moments of caring for a partner that at times doesn't recognize her, raising two children, saving her troubled relationship, and navigating a successful career, all while living with her own illness and enduring the global pandemic." — Booklist

"I wept. I dared to hope. I felt my heart crack. Exceptional." — Sam Baker