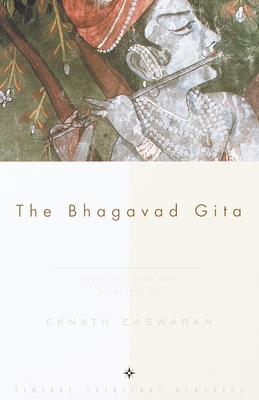 By Eknath Easwaran (Translated by)


Email or call for price.
The Bhagavad Gita is the most famous poem in all of Hindu literature and part of the Mahabharata, the ancient Indian epic masterpiece. The Gita (in Sanskrit, "Song of the Lord") consists of a dialogue between Lord Krishna and Prince Arjuna on the morning of a climactic battle. Krishna provides Arjuna with the spiritual means to understand his own nature so that he can take action and prevail. However, the larger canvas painted in the poem is that of the moral universe of Hinduism. As translator Eknath Easwaran, one of the world's premier teachers of meditation and spirituality, notes "The Gita does not present a system of philosophy. It offers something to every seeker after God, of whatever temperament, by whatever path. The reason for this universal appeal is that it is basically practical: it is a handbook for self-realization and a guide to action."
Eknath Easwaran was director of the Blue Mountain Center of Meditation, which he founded in 1961 in Berkeley, California, after coming to the United States on the Fulbright exchange program as a professor of English literature in 1959. He is the author of many books on the practice of the spiritual life, including Meditation (1978), Gandhi the Man (1972), and Take Your Time: Finding Balance in a Hurried World (1994). Easwaran died in 1999.
“The most important, the most influential, and the most luminous of all Hindu scriptures.” —R.C. Zaehner