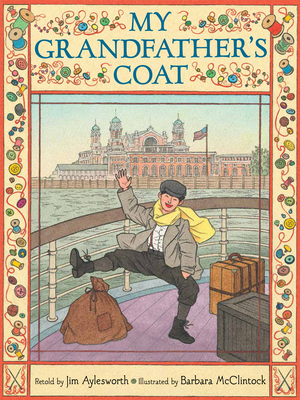 A rollicking, rhyming, fun rendition of a favorite folksong about a many-times recycled coat -- by the award-winning, bestselling team of Jim Aylesworth and Barbara McClintock.
Sydney Taylor Award Winner

"A moving tale of love and regeneration." --The New York Times

He snipped and he clipped--
and he stitched and he sewed. . .
and out of the still-good cloth of his coat--
he made himself a smart jacket!

How many things can Grandfather make
out of that old frayed coat?

Jim Aylesworth's satisfying retelling and Barbara McClintock's heart-warming pictures celebrate the clever recycling of a beloved coat that lasts four generations -- until it becomes this story!

Jim Aylesworth tells his stories with generous doses of "out loud" sounds, rhythms, and rhymes. His twenty-five-year teaching career taught him exactly what children love best in a story. He lives in Chicago, Illinois, with his wife.

Barbara McClintock has written and/or illustrated over 40 distinguished books for children. Emma and Julia Love Ballet which she wrote and illustrated, received three starred reviews, and My Grandfather's Coat, retold by Jim Aylesworth, also received three starred reviews and was named a Sydney Taylor Honor Book. Her books have five times been named New York Times Best Illustrated Children's Books. She has received a Boston Globe-Horn Book Honor, as well as a myriad of other awards and honors. Barbara lives in Connecticut with her family and their four very graceful cats.

Praise and Distinctions for My Grandather's Coat:

"A moving tale of love and regeneration." --The New York Times

* "This is a tale worth reading again and again." -- School Library Journal, starred review

* "Based on the Yiddish folksong "I Had a Little Overcoat," this splendid tale chronicles four generations. Aylesworth and McClintock perform a lovely pas de deux, from a boy's arrival at Ellis Island to his story being shared with a great-grandson....Warmth emanates from this thoughtful book, which deserves to become a multigenerational family favorite." --Publisher's Weekly, starred review

"This tale of family, creativity, and resourcefulness is a warm, touching read-aloud." --Booklist