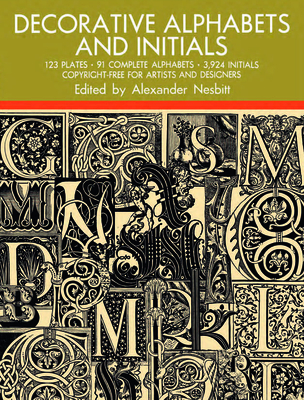 This unusual Dover publication presents a singular opportunity to the artist, crafter, designer, illustrator, printer, or other user of letter designs to have always at hand a rich store of inspiration and a swipe-file. More important, you may reproduce any initial or alphabet in this volume free of charge, without asking permission. The work is all royalty-free; when you buy the book, you buy the reproduction rights to any individual part of it. The price is less than you would pay to professional archives for one copy of the letter.
There are 123 full-page plates including 91 complete alphabets in widely differing styles. In all, there are 3,924 initial letters. These alphabets were obtained from rare, out-of-print books, generally available only in libraries or in the rare-book market. They were reproduced directly from the pages of a large and expensive collection that was made specifically for the production of this volume. Since they are direct reproductions, they will all reproduce again excellently.
The book has been carefully arranged and annotated by the compiler so that the student of letters and types may have a complete understanding of decorative alphabets and initials. The work is divided into three parts. Part One deals entirely with manuscript initials as they were used from the eighth to the fifteenth centuries. It includes Celtic initials, rare designs from the Bible of Charles the Bald, and incised letters from the monument of Richard II in Westminster Abbey. Part Two contains initials from printed books, starting with the fifteenth century and running through the eighteenth. Here are the fanciful creations of the sixteenth-century woodcutters; initials illustrated with children, cherubs, birds, beasts, flowers, legends, and grotesque heads. The work of the later engravers, writing masters, and baroque and rococo designers follows in order. Part Three attempts to arrange the great weedy jungle of Victorian letters and types and concludes with twentieth-century alphabets such as the distinctive wood engraving of Edward Wadsworth. Each section has a historical introduction, and each plate has a descriptive caption.