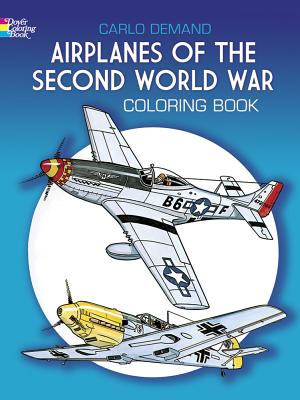 During World War II, armed aircraft became more deadly and sophisticated as the Allied and Axis powers struggled for supremacy. Fighters, bombers, reconnaissance planes, and transports were rapidly developed by both sides and sent into the conflict. The technology changed so quickly that some highly effective planes used early on were outmoded before the end of the war.
Now Carlo Demand, internationally known graphic artist, has rendered 46 planes of World War II especially for coloring. Among them, the Enola Gay, the Japanese Zero used by kamikaze pilots, the German Komet jet fighter, and the spunky British spitfire that performed so valiantly in the Battle of Britain.
Colorists will find detailed information in captions concerning authentic coloring, markings, and insignia, as well as information about design innovations, each plane's military role and affiliation, and other pertinent data. The illustrations are accurate and authentic, and as part of the Dover Pictorial Archive Series, may be used royalty-free. Thirteen of the planes are shown in full color on the covers.
All of the planes pictured here are now, of course, obsolete; but for aviation buffs, military historians, model builders, and illustrators, these superb renderings will recall an era -- a time when the needs of a global conflict spurred tremendous advances in aerial technology, both military and commercial.