A Garland of Forgotten Goddesses: Tales of the Feminine Divine from India and Beyond (Hardcover) 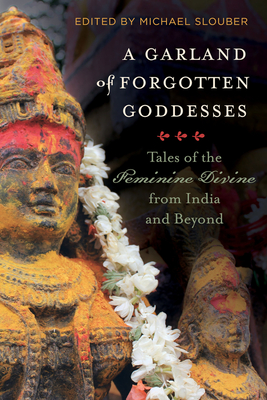 A Garland of Forgotten Goddesses: Tales of the Feminine Divine from India and Beyond (Hardcover)

Imagining the divine as female is rare—even controversial—in most religions. Hinduism, by contrast, preserves a rich and continuous tradition of goddess worship. A Garland of Forgotten Goddesses conveys the diversity of this tradition by bringing together a fresh array of captivating and largely overlooked Hindu goddess tales from different regions. As the first such anthology of goddess narratives in translation, this collection highlights a range of sources from ancient myths to modern lore. The goddesses featured here battle demons, perform miracles, and grant rare Tantric visions to their devotees. Each translation is paired with a short essay that explains the goddess’s historical and social context, elucidating the ways religion adapts to changing times.
Michael Slouber is Associate Professor of South Asian Studies at Western Washington University and the author of Early Tantric Medicine.

"The volume offers impactful contributions to discussions of religion, culture, history, literature, and gender. The artful translations and studies remain accessible to the lay audience for which the work is intended (though perhaps slightly challenging in the more academic sections), while also offering unique content that will appeal to specialists in the field."

"A Garland of Forgotten Goddesses is a welcome supplement to the crowded subfield of studies on Hindu goddesses. It is certain to adorn syllabi and reading lists of both undergraduate classes on Hinduism and more advanced seminars on female divinities. Its contributors deserve many garlands and accolades for being part of this fine work."
— Reading Religion