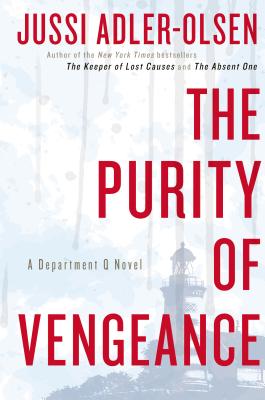 “Since his involvement in an incident in which a detective was killed and another paralyzed, Detective Carl Morck of Copenhagen's Department Q has been assigned to a basement office to work on cold cases. Among a backlog of cases, his assistants discover a series of mysterious disappearances that occurred almost 15 years earlier, all within the same few days. The coincidence intrigues Morck, and two characters, still living, seem to be the common denominator: Nete Hermansen, victimized in her youth, and Curt Wad, a right-wing master of the Purity Party. Adler-Olsen delivers a fast-paced narrative that will keep readers turning the pages until the satisfying conclusion.”
— Mary Fran Buckley, Eight Cousins, Falmouth, MA

Jussi Adler-Olsen's Department Q series, with more than fourteen million copies sold worldwide, continues with the most chilling cold case yet.
In 1987, Nete Hermansen plans revenge on those who abused her in her youth, including Curt Wad, a charismatic surgeon who was part of a movement to sterilize wayward girls in 1950s Denmark.
More than twenty years later, Detective Carl Morck already has plenty on his mind when he is presented with the case of a brothel owner, a woman named Rita, who went missing in the eighties: New evidence has emerged in the case that destroyed the lives of his two partners the case that sent Carl to Department Q.
But when Carl's assistants, Assad and Rose, learn that numerous other people disappeared around the same weekend as Rita, Carl takes notice. As they sift through the disappearances, they get closer and closer to Curt Wad, who is more determined than ever to see the vision of his youth take hold and whose brutal treatment of Nete and others like her is only one small part of his capacity for evil.

JUSSI ADLER-OLSEN is Denmark s #1 crime writer and a "New York Times" bestseller. His books routinely top the bestseller lists in Europe and have sold more than fourteen million copies around the world. His many prestigious Nordic crime-writing awards include the Glass Key Award, also won by Henning Mankell, Jo Nesbo, Stieg Larsson, and Peter Hoeg."

Praise for The Purity of Vengeance

“[A] sordid tale… inspired by actual events during a dark period of Danish history. Ah, but there more, so much more in this frenzied thriller…” -The New York Times Book Review

"The Purity of Vengeance is an enjoyable and eye-opening way to learn about the real Scandinavia, a story so outrageous that not even the best mystery writer can make it up." - The Boston Globe

“When your series relies on cold cases, it’s not always easy to craft plots that have both historical interest and an air of urgency, but it’s something Adler-Olsen is very good at.” - Booklist

"Adler-Olsen merges story lines...with ingenious aplomb, effortlessly mixing hilarities with horrors...This crime fiction tour de force could only have been devised by an author who can even turn stomach flu into a belly laugh." - Publishers Weekly (starred review)

“This series has enough twists to captivate contemporary mystery readers and enough substance and background to entertain readers with historical and literary tastes.”
—Library Journal (starred review) on A Conspiracy of Faith

"From the busy efforts of forensics to some riveting train-and-car chasing near the end, there is no lack of action in A Conspiracy of Faith."
—Houston Chronicle

“A shattering parable of honest individuals caught up in the corruption of our times.”
—Publishers Weekly (starred review) on A Conspiracy of Faith

“Comparisons [to Stieg Larsson] are inevitable and, while he may lack a Salander, Adler-Olsen’s prose is superior to Larsson’s, his tortures are less discomfiting, and he has a sense of humor.”
—Booklist (starred review) on The Keeper of Lost Causes