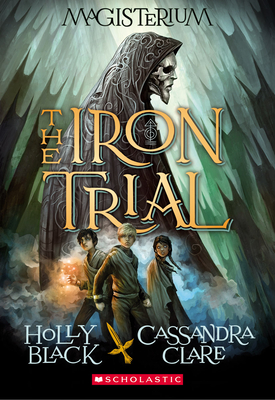 By Holly Black, Cassandra Clare
$7.99
On Our Shelves Now

This is book number 1 in the Magisterium series.

Most kids
would love to pass the Iron Trial to gain admission to the Magisterium,
or academy for magical arts, both altruistic and accursed. Callum's
mother died as a result of magic when he was a baby, and left him with a
serious leg injury.Consequently his father always warns 12-year old
Callum to stay away from magic, which some people can use, though others
lack that gift. Once detected, however, a child with the gift must
enter the Magisterium and learn to control it. Cal tries to fail the
Iron Trial, but despite those efforts, he passes and, full of
misgivings, enters the First (Iron) Year of the Magisterium. He quickly
realizes that his magical ability is quite strong, and for the first
time in his life, he begins to make friends. Away from his protective
father, Cal starts to uncover more about his past and his parent's
experience at the Magisterium. Inevitably, this raises more questions
than it answers --- leading to hot anticipation for further volumes in
the Magisterium series.

Most kids would do anything to pass the Iron Trial.

Not Callum Hunt. He wants to fail.

All his life, Call has been warned by his father to stay away from magic. If he succeeds at the Iron Trial and is admitted into the Magisterium, he is sure it can only mean bad things for him.

So he tries his best to do his worst -- and fails at failing.

Now the Magisterium awaits him. It's a place that's both sensational and sinister, with dark ties to his past and a twisty path to his future.

The Iron Trial is just the beginning, for the biggest test is still to come . . .

From the remarkable imaginations of bestselling authors Holly Black and Cassandra Clare comes a heart-stopping, mind-blowing, pulse-pounding plunge into the magical unknown.

Holly Black is the #1 New York Times bestselling author of The Spiderwick Chronicles (with Tony DiTerlizzi) and the Newbery Honor-winning novel Doll Bones. Her other books include The Good Neighbors graphic novels, and the novels The Darkest Part of the Forest, Tithe, Valiant, and Ironside. She currently lives in the realm of Western Massachusetts.

Cassandra Clare is the author of City of Bones, the first book in The Mortal Instruments trilogy and a New York Times bestseller. Her latest series, The Infernal Devices, has spawned three #1 bestsellers. Born overseas, Cassandra spent her early years traveling around the world with her family and several trunks of books. She lives in Massachusetts.

Praise for Magisterium Book One: The Iron Trial:

“A promising beginning to a complex exploration of good and evil, as well as friendship's loyalty.” – Kirkus Reviews

“This is an incredible book. . . . Once you've started reading, it's hard to put the book down.” – The Guardian