A Hat for Mrs. Goldman: A Story About Knitting and Love (Hardcover) 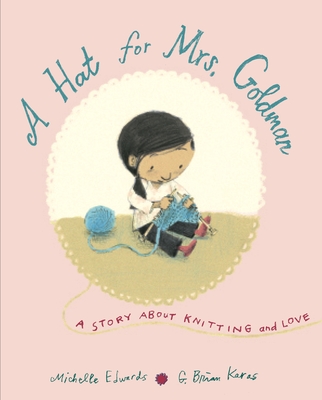 A Hat for Mrs. Goldman: A Story About Knitting and Love (Hardcover)


Email or call for price.
This heartwarming winter story is perfect for those who love to knit and parents looking to teach their children about the importance of doing good for others!

Mrs. Goldman always knits hats for everyone in the neighborhood, and Sophia, who thinks knitting is too hard, helps by making the pom-poms. But now winter is here, and Mrs. Goldman herself doesn't have a hat-she's too busy making hats for everyone else! It's up to Sophia to buckle down and knit a hat for Mrs. Goldman. But try as Sophia might, the hat turns out lumpy, the stitches aren't even, and there are holes where there shouldn't be holes. Sophia is devastated until she gets an idea that will make Mrs. Goldman's hat the most wonderful of all. Readers both young and old will relate to Sophia's frustrations, as well as her delight in making something special for someone she loves.

A knitting pattern is included in the back of the book.

"[A] celebration of winter mitzvahs, or kind deeds. Karas's adorable, radiant art adds to the heartwarming mood."--The New York Times
Michelle Edwards is the author of numerous picture books, including Chicken Man, winner of the National Jewish Book Award; Max Makes a Cake, illustrated by Charles Santoso; and Room for the Baby, illustrated by Jana Christy. A lifelong knitter, Michelle has also written an adult title, A Knitter’s Home Companion. She lives in Iowa City, Iowa, where she and her husband share a house full of books and yarn. Learn more at michelledwards.com.

G. Brian Karas has illustrated many award-winning books for children, including How Many Seeds in a Pumpkin? by Margaret McNamara, Lemonade in Winter by Emily Jenkins, Neville by Norton Juster, Clever Jack Takes the Cake by Candace Fleming, and Are You Going to Be Good? by Cari Best, a New York Times Best Illustrated Children’s Book of the Year. He lives in New York’s Hudson Valley. Visit him at gbriankaras.com.
“Edwards' story radiates warmth and coziness and is a delight to share.” —Kirkus Reviews, starred review

"This heartwarming offering achieves its emotional impact through the loving actions of its main characters and makes for a great read-aloud whether shared one-on-one or with a group in storytime." — School Library Journal, starred review

"It’s a supremely lovely story, a tribute to the rewards of grit and selflessness; Edwards’s (Max Makes a Cake) unadorned, emotionally genuine text is as winning as the pictures." — Publishers Weekly, starred review

"A lovely book to share and discuss, and the hat pattern is included!"— Kirkus Reviews, starred review