The Heart of a Great Nation: Timeless Wisdom from Ronald Reagan (Paperback) 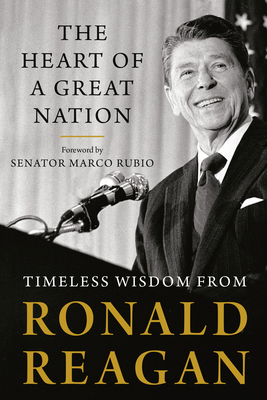 By Ronald Reagan, Marco Rubio (Foreword by)
$20.00
Email or call for price.

With a foreword from Senator Marco Rubio, a stirring collection of Ronald Reagan's most inspiring speeches, offering his timeless wisdom and guidance for our day.

In his 1989 farewell address, Ronald Reagan said, "I wasn't a great communicator, but I communicated great things, and they didn't spring full bloom from my brow, they came from the heart of a great nation--from our experience, our wisdom, and our belief in principles that have guided us for two centuries."

The Heart of a Great Nation brings together Reagan's most powerful speeches, as relevant to our chaotic world as they were when he first gave them. In a period of our country's history consumed by economic stagnation, national instability, and the looming threat of communism, Reagan spoke directly to the hearts of everyday Americans. His wisdom on matters of family, freedom, and nationhood helped guide the country back to its founding principles and ushered in an era of prosperity and national pride.

Today, as we find our country treading similar ground, Reagan's wisdom speaks to us once again, offering guidance to everyone looking to navigate the present and remember the legacy of this great nation--which can one day be reclaimed.

RONALD WILSON REAGAN was the 40th president of the United States from 1981 to 1989. In his two terms, he lowered taxes, increased military spending, and enacted policies that led to the demise of communism in the Soviet Union. An influential figure in modern conservatism, he was given the nickname of the "Great Communicator." Reagan passed away on June 5, 2004.
MARCO RUBIO served in the Florida House of Representatives from 2000 to 2008 and was elected to the U.S. Senate in 2010. His committee assignments currently include Commerce, Science and Transportation; For¬eign Relations; Intelligence; and Small Business and Entrepreneurship. He and his wife, Jeanette, have four young children and live in West Miami.