Courage Like Kate: The True Story of a Girl Lighthouse Keeper (Hardcover) 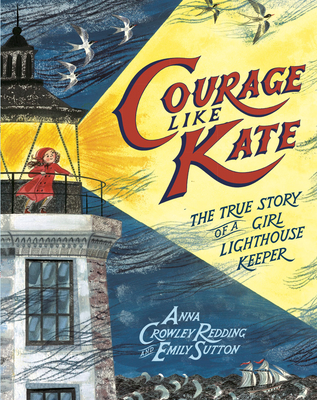 An inspiring and beautifully illustrated picture book biography based on the life of Kate Moore, a twelve-year-old lighthouse keeper in the 19th century who saved the lives of twenty-three sailors.

With an evocative text and stunning illustrations, travel back to the stormy, rocky shores of 19th century Connecticut and meet an unforgettable heroine-- at a time when girls were considered anything but. Fayerweather Island had seen blustery blizzards and rip-roaring tides, but it had never seen a pint-sized hurricane until Kate Moore claimed that tiny island as her own. Little Kate was supposed to be the lighthouse keeper’s daughter, but she thought of herself as Papa’s assistant.

The thirty-three spiraling lighthouse stairs finally took a toll on Papa’s body, and so twelve-year-old Kate stepped up. Over the years, she kept the flame lit to guide ships to safety, listened for cries for help, and, time and again, pulled men to safety—twenty-three of them in all. At the age of forty-seven, Kate received word—she had been named the official lighthouse keeper of Fayerweather Island. This girl-power picture book introduces a small heroine, who, with her can-do attitude and incredible spirit, is sure to inspire.

ANNA CROWLEY REDDING is the author of such children's books as The Gravity Tree, Rescuing the Declaration of Independence, Google It, and Elon Musk: A Mission to Save the World, among others. Her first career was as an Emmy-award winning investigative television reporter, anchor, and journalist. The recipient of multiple Edward R. Murrow awards and recognized by the Associated Press for her reporting, Crowley Redding now focuses her stealthy detective skills on digging up great stories for young readers. Anna’s books have been recognized by NSTA as best STEM books. Visit her on the web at annacrowleyredding.com.

EMILY SUTTON was born in Yorkshire, England, and graduated from the Edinburgh College of Art. She is the illustrator of Grow: Secrets of Our DNA by Nicola Davies, Ernestine's Milky Way by Kerry Madden, The Christmas Eve Tree by Delia Huddy, and Tiny: The Invisible World of Microbes, which won an AAAS award for best picture book. Her work can also be seen on textiles for St. Jude's fabrics, for which she won an Elle Deco award for best surface design. Visit her on the web at emillustrates.com.