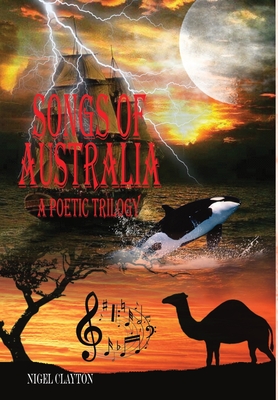 SONGS OF AUSTRALIA - A Poetic Trilogy

Set in South Australia, 1884; this is an epic poem of three Afghan cameleers as they go about delivering supplies along the Birdsville Track. Follow Nak, Shir and Abdul on an adventure across outback Australia, where their pasts catch up to them in many ways. Individual feelings are tested to the limit, insecurities are measured by fear, and desire is outweighed by need. Angry and forgiving, tired and alive, eager and pessimistic. They fight against the conditions, against the hate, and against their pasts.

The orca: they are black and white dolphins, mammals of the sea, warm-blooded creatures that are at the top of the food chain for the territory that they hold within their power, man being their only predator. Tom is born in the Pacific Ocean, 1862; he is 2.5 metres long and weighs 200kg; a grand specimen. George Davidson is born of Eden; May, 1863. This is the story of Tom, Killer whale of Twofold Bay, Eden, friend to George Davidson (bay whaler) and others like him: it is based upon a true story that will live in the memory of the citizens of Eden for eternity, a museum being built in Tom's honour upon his death.

It was a great monopoly and stretched from Holland to Asia - namely Batavia (Jakarta), where the Dutch United East India Company (VOC) headquarters was established - and surrounding countries; a source of great wealth. Trade between these countries was of strategic importance where trade and wealth was concerned, copper, tin, spices, opium and dyes being some of the basic requisites of commerce. From the Cape of Good Hope to Batavia the ships would travel due west for approximately 1,000 Dutch miles before turning north. It was unfortunate for the time, however, that there was no means by which to accurately determine longitude at sea. Eventually land was encountered and this becomes the accepted method of voyage: to seek the sight of land and then head north towards the coast of Sumatra. For almost a hundred years some were lucky enough to cast their eyes upon the west coast of a great mass of land, thought to have been a part of New Guinea. The Zuytdorp departs the Cape of Good Hope, Table Bay, with the ship Kockenge. She pulls ahead of the Kockenge due to her being a much larger and faster vessel. Due to the departure being in April, opposed to the favourable March, the skipper decides to sail until sighting land before turning north for Batavia, to take full benefit of the winds from the west and the voyage then to the north. But catastrophe is all they meet, no success in voyage to be celebrated. The Zuytdorp is shipwrecked. This is the story of the survivors. There is evidence to show that Aboriginals of the Shark Bay area suffer from Porphyria Variegate, a gene mutation that is traceable to the Dutch. It is uncommon and rare, and there is no reason, other than the coupling of an Aboriginal with a survivor of the Zuytdorp, that currently explains the disease being discovered in Australian Aboriginals of WA. I do not declare this to be fact nor fiction: take it as you will.