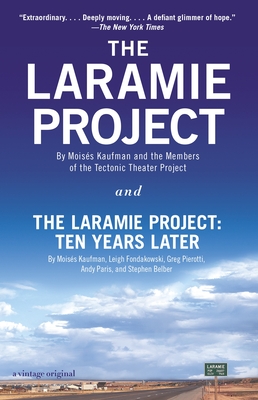 Two classic plays in a single volume: One of the most-performed theater pieces in America about the brutal murder of Matthew Shepard and the town in which it happened, joined by an essential and moving sequel to the original play.

"A terrific piece of theater, history, and life.... Nothing short of stunning.... A theatrical and human event.” —New York magazine

On October 7, 1998, a young gay man was discovered bound to a fence outside Laramie, Wyoming, savagely beaten and left to die in an act of brutality and hate that shocked the nation. Matthew Shepard’s death became a national symbol of intolerance, but for the people of the town, the event was deeply personal. In the aftermath, Moisés Kaufman and members of the Tectonic Theater Project went to Laramie and conducted more than 200 interviews with its citizens. From the transcripts, the playwrights constructed an extraordinary chronicle of life in the town after the murder.

In The Laramie Project: Ten Years Later, the troupe revisits the town a decade after the tragedy, finding a community grappling with its legacy and its place in history. The two plays together comprise an epic and deeply moving theatrical cycle that explores the life of an American town over the course a decade.

MOISÉS KAUFMAN is a Tony and Emmy-nominated director and playwright, and the co-founder and artistic director of Tectonic Theater Project. Kaufman’s plays Gross Indecency: The Three Trials of Oscar Wilde, and The Laramie Project (which he co-wrote with the members of Tectonic Theater) have been among the most performed plays in America over the last decade. He is also the author of the Tony Nominated play 33 Variations; One Arm (his adaptation of the Tennessee Williams screenplay of the same name); and the short play London Mosquitoes. He has directed numerous plays on Broadway including the Pulitzer and Tony Award-winning I Am My Own Wife by Doug Wright which earned Mr. Kaufman an Obie Award for direction as well as Tony, Outer Critics, Lucille Lortell, Drama Desk Awards nominations. Kaufman directed the film adaptation of The Laramie Project, which aired on HBO and was the opening night selection at the 2002 Sundance Film Festival. Kaufman is a Guggenheim Fellow.

“The Laramie Project is a terrific piece of theater, history, and life.... There emerges a mosaic as moving and important as any you will see on the walls of the churches of the world.... Nothing short of stunning.... A theatrical and human event.” —New York magazine

“A towering theatrical accomplishment.... [The Laramie Project is] Our Town for the new millennium, capturing from real life the same sense of humanity in the raw that Thornton Wilder did years ago with the fictional Grover’s Corner. The play moves the theater in a new and different direction.” —San Francisco Times

“Deeply moving.... [Kaufman] has a remarkable gift for giving a compelling theatrical flow to journalistic and historical material.... This play is Our Town with a question mark, as in ‘Could this be our town?’” —The New York Times

“Remarkable.... [A] probing and distinctive theater piece ... assembled with care, compassion and dollops of comic relief.... The high-octane performances and unique staging make this a must see for any theatergoer.” —New York Daily News

"Few playwrights have cut to the heart of tragedy so unerringly." —The Village Voice