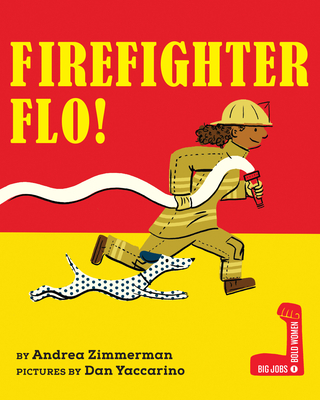 
On Our Shelves Now Online inventory updates every 24 hours. Call 508.548.5548 to verify.
Ring! Clang! Firefighter Flo and her team race to stop a fire in this picture book filled with bold art and fun onomatopoeia.

Firefighter Flo jumps out of bed! There’s a fire and only a pro like Flo and her team can help. Read along as the firefighters put on their fireproof suits, rush off in their truck, douse the fire with the big hose, and rescue the family pet. The CLANG of the siren and WHOOSH of the fire will have parents and kids reading aloud together.

The Big Jobs, Bold Women series introduces even the youngest readers to women as leaders in unusual jobs with teams relying on them. The first in the series, Fire Flo makes this empowering message accessible with a showstopping art and story about a job every kid loves.

With dynamic artwork from Dan Yaccarino, Nickelodeon character designer for The Backyardians, and energetic verse from Andrea Zimmerman, best-selling author of Trashy Town, Firefighter Flo is the perfect read for kids who love to watch the big red fire trucks rush by.
ANDREA ZIMMERMAN is the author of many beloved series including Trashy Town and Smashy Town, illustrated by Dan Yaccarino; the bestselling truck series Bulldozer Friends, Digger Man, Fire Engine Man, and Train Man; All Buckled Up and All Dressed Up (S&S/Little Simon); and Dig! illustrated by Marc Rosenthal. Andrea grew up in Ohio, Utah, New York, and California.  She enjoys gardening, going for walks, and visiting museums.

DAN YACCARINO is an author-illustrator who been named to the Texas Bluebonnet list for The Fantastic Undersea Life of Jacques Cousteau, Kirkus' Best Children's Book List for All the Way To America, The New York Times 10 Best Illustrated List and the Bologna Ragazzi for Every Friday. His picture book I Am a Story is a Junior Library Guild Selection and a Chicago Public Library Best Book of 2016. He's also the creator and producer of several animated series based on his books, Doug Unplugs (AppleTV), Oswald (Nickelodeon), Willa's Wild Life (NBC and Qubo), as well as the character designer behind The Backyardigans (Nickelodeon).
★ "Zimmerman’s rhyming narration remains at a fever pitch. . . . Yaccarino’s punchy graphics are in full force. . . . Flo’s bravery is served up with five-alarm excitement."—Publishers Weekly, Starred Review

"This high-energy, heart-pounding tribute to firefighters, with its bold visuals and enthusiastic text, would make an especially lively pick for a group setting like storytime, even for the youngest listeners—invite a local firefighter to share in the fun."—The Horn Book

"A quick and effervescent tribute to every city’s bravest. . . ."—School Library Journal

"It's an exciting story, and one that's chock-full of descriptive words that will help build young readers' vocabularies. Aiding that goal are the bold and bright digital illustrations, which have a sleek, classic vibe and make use of pops of red to keep young (and older) eyes dancing around the page. This one will be a popular choice among librarians, caregivers, and readers for years to come. Readers will be happy to have Flo in their homes day or night! This book's on fire!"—Kirkus Reviews

"An exciting book for all readers, especially empowering for girls."—Booklist