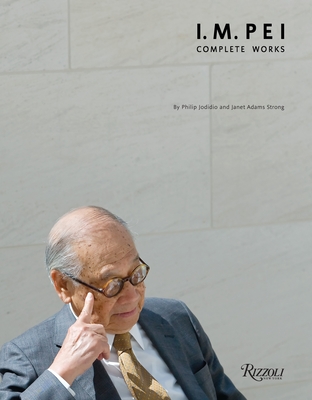 When I. M. Pei was awarded the Pritzker Prize in 1983, the jury said he had "given this century some of its most beautiful interior spaces and exterior forms." I. M. Pei: Complete Works, the first and definitive survey of the master architect, attests to this statement by showcasing Pei’s transcendent, sculptural forms in over fifty projects and more than 300 illustrations, culminating in the last works he is currently completing. Often working in a spare geometry with a palette of stone, concrete, glass, and steel, Pei—who began his career pioneering public housing projects in New York City—has taken his vision of modern architecture across the globe with commissions in locations as diverse as Quatar, China, Luxembourg, Japan, and Germany. Meanwhile, major projects such as the JFK Library in Boston and the East Building of the National Gallery of Art in Washington, D.C., have made him a household name in the United States.

Philip Jodidio was the editor in chief of the French art journal Connaissance des Arts from 1980 to 2002. He is the author of more than fifteen books, including monographs on Tadao Ando, Norman Foster, and Richard Meier. Janet Adams Strong is an architecture historian who has taught at Brown University and Rhode Island School of Design. She was director of communications in I. M. Pei’s office for eighteen years. Carter Wiseman is the author of I. M. Pei: A Profile in American Architecture. He was New York Magazine’s architecture critic for sixteen years.

"...a comprehensive survey of concrete, glass, stone and steel masterworks created over a span of 50 years."
~Home & Design Sourcebook

"By including the modest as well as the monumental, I. M. Pei: Complete Works...adds a personal dimension to a man known to most of us only as an icon." ~O, the Oprah Magazine

"...showcases Pei's transcendent work in over 50 projects, culminating in the commission he is currently completing." ~Bal Harbour

"Sketches, plans and photographs from multiple vantage points provide insight into Pei's technique, but it is the frankness of Pei himself...that distinguishes this compendium." ~The Washington Post

"By the end of "I. M. Pei: Complete Works"...it is easy to believe that Walter Groupius's challenge (...use architecture to change the world...) six decades ago has been met." ~The Wall Street Journal