Voices of Dissent: An Essay (Hardcover) 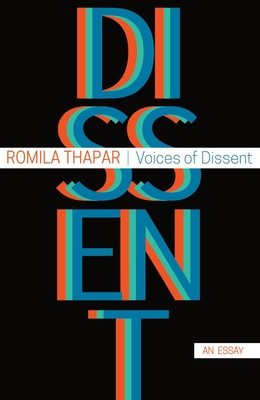 Voices of Dissent: An Essay (Hardcover)


Email or call for price.
People have argued since time immemorial. Disagreement is a part of life, of human experience. But we now live in times when any form of protest in India is marked as anti-Indian and met with arguments that the very concept of dissent was imported into India from the West. As Romila Thapar explores in her timely historical essay, however, dissent has a long history in the subcontinent, even if its forms have evolved through the centuries.

In Voices of Dissent: An Essay, Thapar looks at the articulation of nonviolent dissent and relates it to various pivotal moments throughout India’s history. Beginning with Vedic times, she takes us from the second to the first millennium BCE, to the emergence of groups that were jointly called the Shramanas—the Jainas, Buddhists, and Ajivikas. Going forward in time, she also explores the views of the Bhakti sants and others of the fifteenth and sixteenth centuries, and brings us to a major moment of dissent that helped to establish a free and democratic India: Mahatma Gandhi’s satyagraha. Then Thapar places in context the recent peaceful protests against India’s new, controversial citizenship law, maintaining that dissent in our time must be opposed to injustice and supportive of democratic rights so that society may change for the better.

Written by one of India’s best-known public intellectuals, Voices of Dissent will be essential reading not for anyone interested in India’s fascinating history, but also the direction in which the nation is headed.

Romila Thapar is an emeritus professor of history at the Jawaharlal Nehru University, New Delhi, and she was previously general president of the Indian History Congress. She is a fellow of the British Academy and holds honorary doctorates from Universities of Calcutta, Oxford University and the University of Chicago, among others. She is an Honorary Fellow of Lady Margaret Hall, Oxford, and SOAS, London. In 2008, she was awarded the prestigious Kluge Prize from the Library of Congress.

"Where this book shines is in its discussion of how dissent often arises from within cultures, and not from outside, restructuring social relations and enabling mutation of knowledge through the questioning of institutions. . . . The book raises some significant questions, not only for the political establishment but also for dissenters. Does dissent seek resolution of conflict, sharing of power, annihilation of tradition, or merely a recognition of plurality in thought? . . . If dissent gives way to accommodation, is that a win-win situation or a selling out? Can ideological purity coexist with political pragmatism?"
— Business Standard

"Dissent, expressed against the state as much as institutional forms of religion, creates traditions of thinking that are always available as a resource. Hence, when Gandhi thinking against colonial violence thinks through the idea of satyagraha, he draws upon a library of dissent with its vocabulary and forms. . . . Thapar does not make an argument for passive inheritance. At each historical juncture, the reimagining of an ethical conception of equality and compassion draws upon a rich vein of dissentient thought. Democracy survives because of dissent. Forms of political and social orthodoxy are contingent; and the battle against them is always ongoing."
— India Today