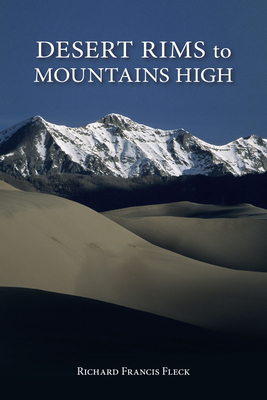 
Currently not in store. Available to order. Usually Ships in 3-7 Days
Inspired by his ranger days in Rocky Mountain National Park more than forty-five years ago as well as more recent rambles, Richard Fleck has created these descriptive essays that take readers from shimmering desert heat to snowy summits. Fleck has expanded his acclaimed book Breaking Through the Clouds (2004) to create a new book that concentrates on the intermountain American West. This edition includes counterpoint experiences in the desert, canyon lands, and dry prairie far below the summits of the lofty peaks, such as Death Valley, Grand Gulch, Grand Canyon, and the Great Sand Dunes. His literary model was Edward Abbey's Desert Solitaire and his intent is to involve readers with an equally potent but different kind of natural reality. Fleck says, "After all, do not mountains rise out of deserts and dry lands? Mountains and surrounding deserts should not be separated." The mountains are a constant source of spiritual renewal for this author, enabling him to become more aware and whole.
Richard F. Fleck is author of many books including Henry Thoreau and John Muir Among the Indians, editor of John Muir's Mountaineering Essays, A Colorado River Reader, which was selected by the National Endowment for the Humanities to be the reader for seven states project 2001-2. He contributed a biography of John Burroughs for the Encyclopedia of New York State. Fleck is also the author of numerous introductions to trade paperback editions including Henry David Thoreau's Maine Woods, John Muir's Our National Parks, and Samuel Hall Young's Alaska Days with John Muir.