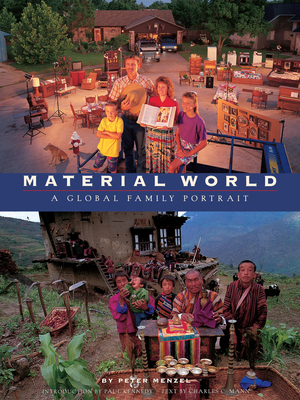 
Currently not in store. Available to order. Usually Ships in 3-7 Days
Called “Fascinating! An incredible book” by Oprah Winfrey, this beloved photography collection vividly portrays the look and feel of the human condition everywhere on Earth.

In an unprecedented effort, sixteen of the world’s foremost photographers traveled to thirty nations around the globe to live for a week with families that were statistically average for that nation. At the end of each visit, photographer and family collaborated on a remarkable portrait of the family members outside their home, surrounded by all of their possessions; a few jars and jugs for some, an explosion of electronic gadgetry for others.

This internationally acclaimed bestseller puts a human face on the issues of population, environment, social justice, and consumption as it illuminates the crucial question facing our species today: Can all six billion of us have all the things we want?
Peter Menzel is a photographer known for his coverage of international feature stories on science and the environment. His award-winning photographs have been published in Life, National Geographic, Smithsonian, The New York Times Magazine, Time, Stern, GEO, and Le Figaro. Together with Faith D’Aluisio, he is the co-creator of the books Material World: A Global Family Portrait and Women in the Material World; and is the co-author of Man Eating Bugs: The Art and Science of Eating Insects.

Faith D'Aluisio is a former television news producer and is the editor and lead writer for their Material World books, which include Material World: A Global Family Portrait, Women in the Material World, the James Beard Award-winning Man Eating Bugs, and What the World Eats.
“Material culture, laid bare in this way, is surprisingly intimate—and whets a persons appetite to see the world.” —The Atlantic

“This remarkable book vividly presents its own cross section of families today, with the energy and intimacy of a work of art for our times . . . This is a record of striking value. No time traveler could bring back a more valuable resource.” —Scientific America