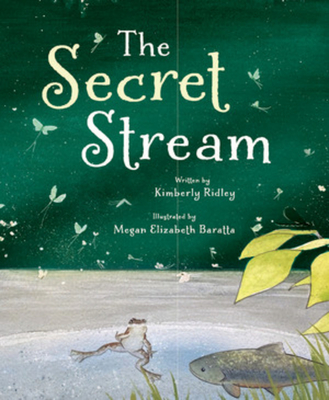 In this nonfiction picture book, a stream narrates its own natural history as it flows from its headwaters in the mountains to its mouth in the lowlands, introducing the plants and animals that line its banks and live in its waters.

The poetic story, combining lyricismwith natural history excellence, is augmented and enriched by informativesidebars and backmatter. Birds, mammals, amphibians, and insects peek out from the beautiful, scientifically accurate illustrations.

Science writer Kimberly Ridley is an award-winning author of nonfiction books for children. Her joy is sharing her love of nature and writing with children through her books and school visits. Kimberly’s picture books, The Secret Pool (Kirkus starred review) and The Secret Bay, have received honors including Riverby Awards from the John Burroughs Association for “outstanding natural history books for young people.” Her newest book is THe Secret Stream A former magazine editor, Kimberly has written for publications including The Boston Globe, the Christian Science Monitor, and Downeast Magazine. She holds an MS in Science Journalism.

Megan Elizabeth Baratta is the illustrator of Most Days and I Begin with Spring, both of which received starred reviews. See more at barattastudio.com.

Follow a headwater stream from its start as a spring in the forest on its journey to becoming a river, nourishing life all along its length. The main text, written in the first person from the point of view of the stream itself, sticks to the top or left of each spread, introducing major ideas: how insect larvae and nymphs recycle leaves; kingfishers; beaver dams, etc. Further information on, for instance, aquatic insect metamorphosis or otters’ transparent eyelids, is found underneath headings in a slightly smaller font. As the water flows downstream, children read about riffles, how aquatic insects must anchor themselves or be washed down to be a trout’s meal, the importance of trees along the stream’s banks, and the animals that find food or shelter near the water. Most but not all animal species are labeled in the illustrations, which are mostly realistic looking and come to life with masterful use of shading and sunbeams. The text alternates between rhyming and not, which can be distracting. Endpages are two halves of a map showing the course of the stream and the many sights pointed out in the text.

Young naturalists will be heading to the nearest stream to explore.

Narrated in intermittent rhymes and using onomatopoeia, this educational picture book traces a headwater stream from its origins in the falling rain; its waters burble up from the ground and tumble over rocks. The illustrations are soothing, with eye-catching natural features, including flora and insect and animal life: an otter peeps over a rock, and a brook trout scans for insects to gobble. The light breaks through the forest canopy and slices through the stream’s surface, inviting contemplation over the intricacies of nature.
— Michelle Anne Schingler - Foreword Reviews