While the Gods Play: Shaiva Oracles and Predictions on the Cycles of History and the Destiny of Mankind (Paperback) 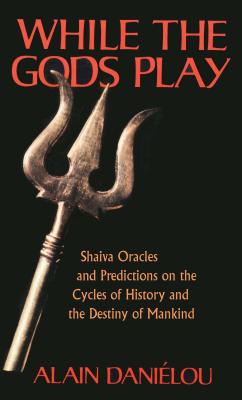 While the Gods Play: Shaiva Oracles and Predictions on the Cycles of History and the Destiny of Mankind (Paperback)


Currently not in store. Available to order. Usually Ships in 3-7 Days
According to the early writings of the Shaiva tradition--still alive in India and dating back at least 6,000 years--the arbitrary ideologies and moralistic religions of modern society signal the last days of humanity heading toward destruction.

This prediction is only a fragment of the vast knowledge of Shaiva wisdom, author Alain Danielou as assimilated and reviewed essential concepts of the Shaiva philosophy and its predictions. Clearly expressed in the ancient teachings, these concepts are in accord with, yet surpass, the boldest scientific speculations about consciousness, time, the nature of life and matter, and the history and destiny of the human race.

Inherent in this body of knowledge is an understanding of the cycles of creation and destruction which, in conjunction with astronomical phases, determine the life span of the species. Since 1939, humankind has been in the twilight of the Kali Yuga age, or at the end of a cycle. The impending cataclysm, Danielou explains, is brought on by our own errors, and its date will be determined by our present and future actions.

While the Gods Play examines how the visionaries of ancient times defined our rose in creation. It explains why and how we have abandoned this role, and reflects on what action can be taken to consciously and creatively influence our own destiny. Included are chapters on The Religion of Nature and The Religion of the City, The Transmigrant Body, Sexual Rites, the Castes, Sacrifice, Magical Powers, Monastic Orders, and Forestalling the Final Day.
Alain Daniélou (1907-1994) spent more than 15 years in the traditional society of India, using only the Sanskrit and Hindi languages and studying music and philosophy with eminent scholars. He was duly initiated into esoteric Shaivism, which gave him unusual access to texts transmitted through the oral tradition alone. He is the author of more than 30 books on the religion, history, and arts of India and the Mediterranean.
"[Danielou] is a man deeply rooted in the esoteric traditions of East and West, and who for the educated readers should be the esoteric equivalent of a household name. Powerful and transformative."
— Institute of Hermetic Studies, Nov 2007