Quest for Justice: Select Tales with Modern Illuminations from the Mahabharata (Paperback) 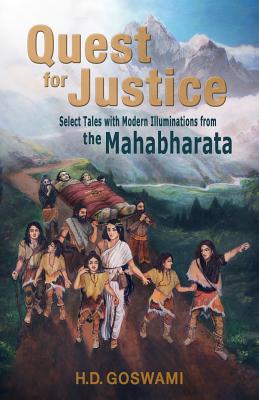 Quest for Justice: Select Tales with Modern Illuminations from the Mahabharata (Paperback)

The Mahabharata is one of the world's most significant historical epics. At a staggering one hundred thousand stanzas, this massive work reveals a highly complex ancient civilization - one that not only excelled in the arts, sciences, and philosophy, but that also embodied the highest ideals of justice, morality and spiritual understanding. Romance, tyranny, war and supreme enlightenment, all are described in this riveting, divinely inspired narrative, which has profoundly influenced South Asian culture and spirituality for thousands of years.

Quest for Justice is based upon a collection of lectures on various themes and episodes from the Mahabharata. Paralleling the magnetic oral style of the Epic itself, the book transmits these ancient narratives in an appealing, highly accessible, and engaging contemporary voice. Delivered with frequent good humor, the talks are easy and entertaining, even as they clearly confront the deepest meanings of the text. Indeed, H.D. Goswami skillfully depicts the psychological depth of the characters and the existential dilemmas they face in a strikingly vivid and immediate way. With his trademark wit, erudition and insightful analysis, Goswami breathes new life into the most compelling episodes of this ancient literary masterpiece.