Captured by a Laird (Paperback) 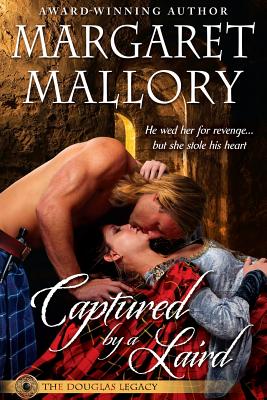 The Douglas sisters, beauties all, are valuable pawns in their family's bitter struggle to control the Scottish Crown. But when powerful enemies threaten, each Douglas lass will find she must face them alone.

CAPTURED BY A LAIRD

Haunted by his father's violent death, David Hume, the new laird of Wedderburn, sets out to make his name so feared that no one will dare harm his family again. The treacherous ally who played on his father's weakness is dead and beyond David's vengeance, but his castle and young widow are ripe for the taking. The moment David lays eyes on the dark-haired beauty defending her wee daughters, however, he knows this frail-looking lass is the one person who could bring him to his knees.

Wed at thirteen to a man who tried daily to break her spirit, Lady Alison Douglas is looking forward to a long widowhood. But when the fearsome warrior known as the Beast of Wedderburn storms her gates, she finds herself, once again, forced to wed a stranger. Alison is only a pawn to serve his vengeance, so why does this dark warrior arouse such fiery passion and an unwelcome longing in her heart?

With death and danger looming, these two wounded souls must learn to trust each other...for only love can save them.

Margaret Mallory is the award-winning author of the Scottish historical romance series, THE RETURN OF THE HIGHLANDERS, and the medieval trilogy, ALL THE KING'S MEN. Her books have won numerous honors, including a RITA(c) nomination, RT Book Reviews' Best Scotland-Set Historical Romance Award, the National Readers' Choice Award, and two Maggies. CAPTURED BY A LAIRD is the first book in her new Scottish Historical series, THE DOUGLAS LEGACY. Margaret abandoned her career as a lawyer to become a romance novelist when she realized she'd rather have thrilling adventures with handsome Highland warriors than write briefs and memos. Margaret lives with her husband in the beautiful Pacific Northwest, which looks a lot like parts of the Scottish Highlands. Now that her children are off on their own adventures, she spends most of her time writing, but she also loves to read, watch movies, hike, and travel. Readers can find information on all of Margaret's books, photos of Scotland, historical tidbits, and links to Margaret on Facebook and Twitter on her website, www.MargaretMallory.com.