In Praise of Limes (Paperback) 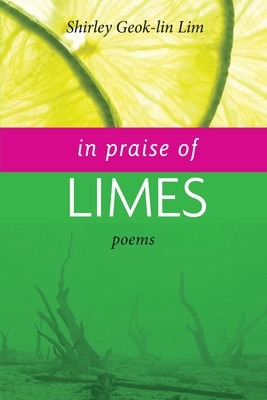 In Praise of Limes is a book of original poems by Shirley Geok-lin Lim. Born in Malacca, Malaysia, Shirley Geok-lin Lim was raised by her Chinese father and attended missionary schools. Although her first languages were Malay and the Hokkin dialect of Chinese, she was able to read English by the time she was six. At 10, her first poem was published in the Malacca Times; by age 11, she knew she wanted to be a poet. She earned her BA from the University of Malaya and her PhD from Brandeis University.

Lim considers herself primarily a poet, although she has also written books of short stories, criticism, a novel, and a memoir. Her debut collection, Crossing the Peninsula and Other Poems (1980), won the Commonwealth Poetry Prize-a first for a woman or a person from Asia. Her other collections include Ars Poetica for the Day (2015), The Irreversible Sun (2015), Do You Live In? (2015), and Embracing the Angel: Hong Kong Poems (2014). Her many awards and honors include a Fulbright Distinguished Lecturer award, two American Book Awards, and the Society for the Study of Multi-Ethnic Literature of the United States Lifetime Achievement Award.

Lim was a professor of English and chair of the Women's Studies department at the University of California, Santa Barbara. She retired in 2012 after more than a decade of service to the school.