My Twenty-five Years in Provence: Reflections on Then and Now (Vintage Departures) (Paperback) 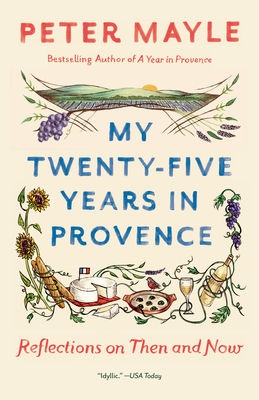 My Twenty-five Years in Provence: Reflections on Then and Now (Vintage Departures) (Paperback)


Backordered. Please call 508.548.5548 for more information.
From the moment Peter Mayle and his wife, Jennie, uprooted their lives in England and crossed the Channel permanently, they never looked back. Here the beloved author of A Year in Provence pays tribute to the most endearing and enduring aspects of his life in France—the charming and indelible parade of village life, the sheer beauty, the ancient history. He celebrates the café and lists some of his favorites; identifies his favorite villages, restaurants, and open-air markets; and recounts his most memorable meals. A celebration of twenty-five years of Provençal living—of lessons learned and changes observed—with his final book Mayle has crafted a lasting love letter to his adopted home, marked by his signature warmth, wit, and humor.
Peter Mayle wrote fifteen previous books. He was a proud recipient of the Légion d’Honneur from the French government for his cultural contributions. He died in January 2018.
“Full of thoughtful reflections and trenchant observations. . . . It’s wonderful to get to go on one more journey with [Mayle] and remember why we fell in love with him and his writing.” —San Francisco Chronicle

“A warm, nostalgia-soaked look at the place [Mayle] loved so dearly, packed with fond recollections of the pleasures of life in the region, from pastis to Pétanque.” —Travel + Leisure

“[Mayle’s] keen eye and wit are much on display.” —The Philadelphia Inquirer

“Delightfully quaint anecdotes from the years since Mayle and his wife, Jennie, escaped office life in New York and London in the 1980s for ‘a simpler, sunnier life’ in Provence. . . . Composed in a uniformly bright and jocular voice, this is a breezy valedictory note for a much admired writer.” —Publishers Weekly

“A welcome, if bittersweet, victory lap. The book’s final sentences are particularly resonant of a life well lived: ‘I must go. Lunch is calling.’” —The New York Times Book Review

“Mayle takes readers back to the idyllic, slow-paced and occasionally befuddling world that [he] first wrote about in his best-selling memoir A Year in Provence. . . . [My Twenty-Five Years in Provence] treads delightfully familiar ground for fans who succumbed to the charms of Mayle’s first book. The new volume transports readers to the South of France through the eyes of an Englishman who never ceases to marvel at the sunshine, fine food and sometimes inscrutable culture of his adopted turf.” —Associated Press

“In this final memoir, Mayle returns to the beginning. . . . This is France, so of course food and wine play a large part in his writing. But while Mayle can pen a mouthwatering description of bouillabaisse, what has always drawn readers to his writing are his loving portraits of people, community and the Provençal way of life.” —BookPage

“Mayle’s mellowest book, touched by the tenderness of a writer summing himself up. . . . Even in moments of majesty, Mayle’s puckish humor prevails.” —The Wall Street Journal

“One of the most successful and influential memoirists of our era. . . . [Mayle’s writings] not only inspired people to explore the French countryside, they encouraged travelers to explore the world differently.” —Toronto Star

“Peter Mayle may have single-handedly created an American and British obsession with the French region of Provence when he published A Year in Provence in 1989. . . . [His] latest book . . . retains the charm of the original. His gentle humor and precise descriptions bring to life a region where time is relative and old ways persist.” —The Providence Journal

“Confirmation that daydreams do come true. . . . Mayle had the gumption to do what many only daydream about: run away to a paradise.” —Library Journal