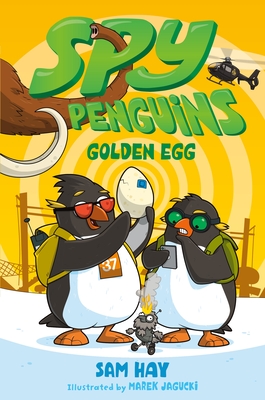 This is book number 3 in the Spy Penguins series.

A legendary criminal has escaped from jail, and Jackson and Quigley are on the case! This time they will definitely prove themselves worthy of joining the FBI (Frosty Bureau of Investigation). There's just one small problem: the Egg. Jackson's mom has come down with the flu, and needs Jackson take her place helping the Egg compete in the prestigious Golden Egg Games.

With a criminal to catch, two thefts to solve, a competition to win, and an escape artist Egg to keep track of, Jackson and Quigley are going to need all the special agent skills and gadgets they can muster!

Sam Hay is the author of more than forty books for children including Spy Penguins, the Undead Pets series, Star in the Jar, and the Stella and the Night Sprites series. Raised in Scotland and trained as a journalist in Edinburgh, Sam became a full-time writer when her first baby was born and now lives in Wales with her husband and two children.

Marek Jagucki, the illustrator of the My Big Fat Zombie Goldfish series, is a graduate of Falmouth School of Art and Design. He is a full-time illustrator and graphic designer based in Yorkshire, UK.

"An endearing story for fans of the animated film Ice Age and Kate DiCamillo’s Flora & Ulysses(2013)... An entertaining romp." --Kirkus

"Penguin details (“Quigley puffed up his feathers”) and humor (“There was one tiny, krill-sized problem with this plan”) by Hay (the Undead Pets series) build the world alongside cartoon illustrations by Jagucki. A quick pace, an engaging mystery, and attempted inventions . . .will keep readers hooked on this series opener." —Publishers Weekly

"The first in a new series, this is chock full of penguin-themed wordplay . . .Quigley’s inventions, including an “invisibility suit” made of sardine poop, are quirky and fun, as are Jackson’s attempts to distract his mom from discovering his spy exploits. This light, funny adventure series will appeal to elementary school mystery fans." —School Library Journal