Origins of The Wheel of Time: The Legends and Mythologies that Inspired Robert Jordan (Hardcover) 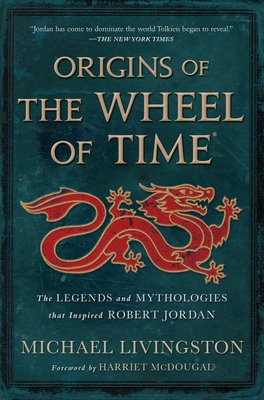 Origins of The Wheel of Time: The Legends and Mythologies that Inspired Robert Jordan (Hardcover)

“Jordan has come to dominate the world Tolkien began to reveal.” —The New York Times on The Wheel of Time® series

Explore never-before-seen insights into the Wheel of Time, including:
- A brand-new, redrawn world map by Ellisa Mitchell using change requests discovered in Robert Jordan's unpublished notes
- An alternate scene from an early draft of The Eye of the World
- The long-awaited backstory of Nakomi
- 8 page, full color photo insert

Take a deep dive into the real-world history and mythology that inspired the world of Robert Jordan's The Wheel of Time®. Origins of The Wheel of Time is written by Michael Livingston, Secretary-General of the United States Commission on Military History and professor of medieval literature at The Citadel, with a Foreword by Harriet McDougal, Robert Jordan's editor, widow, and executor of his estate.

This companion to the internationally bestselling series will delve into the creation of Robert Jordan’s masterpiece, drawing from interviews and an unprecedented examination of his unpublished notes. Michael Livingston tells the behind-the-scenes story of who Jordan was, how he worked, and why he holds such an important place in modern literature.

Origins of The Wheel of Time will provide exciting knowledge and insights to both new and longtime fans looking to either expand their understanding of the series or unearth the real-life influences that Jordan utilized in his world building—all in one, accessible text.

Michael Livingston, PhD. is the foremost academic interpreter of Robert Jordan's literary accomplishment and legacy. Among his many other books are the Shards of Heaven trilogy of novels (published by Tor) and multiple award-winning studies of military history. At present, he serves as the Secretary-General for the United States Commission on Military History and teaches at The Citadel.