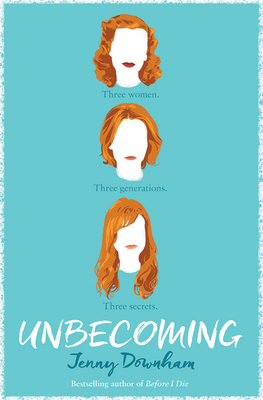 By Jenny Downham
$12.99
Currently not in store. Available to order. Usually Ships in 1-5 Days

Katie's life is falling apart: her best friend thinks she's a freak, her mother, Caroline, controls every aspect of her life, and her estranged grandmother, Mary, appears as if out of nowhere. Mary has dementia and needs lots of care, and when Katie starts putting together Mary's life story, secrets and lies are uncovered: Mary's illegitimate baby, her zest for life and freedom and men; the way she lived her life to the full yet suffered huge sacrifices along the way. As the relationship between Mary and Caroline is explored, Katie begins to understand her own mother's behavior, and from that insight, the terrors about her sexuality, her future, and her younger brother are all put into perspective.

Funny, sad, honest, and wise, this powerful multigenerational novel from international bestseller Jenny Downham celebrates life like no book before.

Jenny Downham is a critically acclaimed, international bestseller. Her debut novel, Before I Die, was shortlisted for numerous awards in the UK, including the Guardian Award and the Lancashire Children's Book of the Year, was nominated for the Carnegie Medal and the Booktrust Teenage Prize, and won the Branford Boase Award. Before I Die was turned into a movie called Now is Good starring Dakota Fanning in 2012. Her most recent novel, Unbecoming, garnered four starred reviews and was an Entertainment Weekly Must List pick. Jenny lives in London with her two sons.

A Publishers Weekly Best Book of the Year

A Bookpage Best Teen Book of the Year

Shortlisted for the YA Book Prize

Shortlisted for The People's Book Prize

An iBooks Best Book of the Month pick

"This beautiful rumination on the relationships between mothers and daughters should be on every woman's reading list." --Buzzfeed

"[A] beautiful, funny, and heart-breaking story of family and life itself." --Bustle

"Fluid, perfectly paced, and can be easily read in one sitting. This is a heartfelt book that sensitively and honestly reveals family issues, and it's one that teens won't want to miss." --Bookpage, Teen Top Pick

"This life-affirming story about a complicated family . . . is stunningly told." --The Times (UK), Children's Book of the Week

"A rich and complex coming of age story." --The Guardian (UK)

Praise for Before I Die:

*"The eloquent dying teen can seem a staple of the YA novel, but this British debut completely breaks the mold. Downham holds nothing back in her wrenching and exceptionally vibrant story."--Publisher's Weekly, starred review

"In luminous prose that rings completely true, Downham earns every tear she wrings from her readers. I trust there will be many of them--many readers, and of course, many tears. A-"--Entertainment Weekly