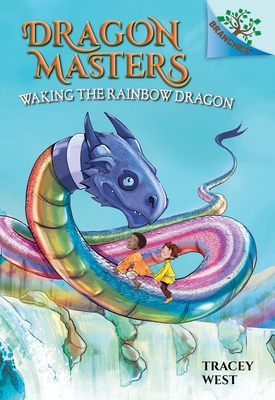 This is book number 10 in the Dragon Masters series.

Dragon Masters Drake and Ana travel to a new land in search of the Rainbow Dragon!
Pick a book. Grow a Reader!

In the tenth book in this series, Drake has a strange dream about a Rainbow Dragon trapped in a cave. He wonders if the dream could be real... Is the dragon trying to send for help? Griffith the wizard uses the magical Dragon Stone to find out more -- and a new Dragon Master is revealed! Drake and Ana must travel far in search of the new master and his dragon. But how will they find the secret cave from Drake's dream? And why is the Rainbow Dragon trapped there? The Dragon Masters have a tough battle ahead of them!

Tracey West has written more than 200 books for children and young adults, including the following series: Pixie Tricks, Hiro's Quest, and Dragon Masters. She has appeared on the New York Times bestseller list as author of the Pokémon chapter book adaptations. Tracey currently lives with her family in New York State's Hudson Valley. She can be found on Twitter @TraceyWestBooks.

Damien Jones spent his childhood daydreaming and drawing. He attended the Arts Institute of Bournemouth where he gained a BA Hons in Animation Production. He worked as an animator on films like the Oscar-nominated feature film L'illusionniste (2010) before beginning his career in book illustration. He has worked with publishers such as Simon & Schuster, Random House, and Scholastic. He lives in Cornwall, UK, with his family.

A USA Today bestseller!
Praise for Rise of the Earth Dragon (Dragon Masters #1):

"In this first of the Dragon Masters series, vocabulary is accessible; sentences, paragraphs, and chapters are short; and dialogue moves the story along rapidly. Black-and-white sketch-type drawings add depth to the story and feelings to the characters (both children and dragons). Emergent readers will find happy success here." -- Booklist

"The first of a new series of early chapter books, this entry is sure to attract fans. Brief chapters, large print, lots of action, attractive illustrations in every spread including a maplike panorama, an enviable protagonist -- who wouldn't want to be a Dragon Master? -- all combine to make an entertaining read. With plenty left to be resolved, the next entry will be eagerly sought after." -- Kirkus Reviews