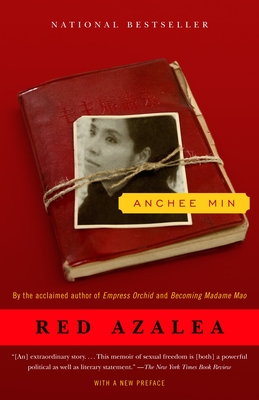 A revelatory and disturbing portrait of China, this is Anchee Min’s celebrated memoir of growing up in the last years of Mao’s China. As a child, Min was asked to publicly humiliate a teacher; at seventeen, she was sent to work at a labor collective. Forbidden to speak, dress, read, write, or love as she pleased, she found a lifeline in a secret love affair with another woman. Miraculously selected for the film version of one of Madame Mao’s political operas, Min’s life changed overnight. Then Chairman Mao suddenly died, taking with him an entire world. This national bestseller and New York Times Notable Book is exceptional for its candor, its poignancy, its courage, and for its prose which Newsweek calls "as delicate and evocative as a traditional Chinese brush painting."

Anchee Min was born in Shanghai in 1957. At seventeen she was sent to a labor collective, where a talent scout for Madame Mao's Shanghai Film Studio recruited her to work as a movie actress. She came to the United States in 1984 with the help of actress Joan Chen. Her memoir, Red Azalea, won the Carl Sandburg Literary Award in 1993 and was named a New York Times Notable Book in 1994. Other works from Min include Becoming Madame Mao, Empress Orchid, Katherine, and Wild Ginger

"[An] extraordinary story. . . . This memoir of sexual freedom is [both] a powerful political as well as literary statement."
—The New York Times Book Review

"The book sings. It is a small masterpiece. . . [No one] has written more honestly and poignantly than Anchee Min about the desert of solitude and human alienation at the center of the Chinese Communist revolution." —Vogue

"Gripping. . . .reads like raw testimony. . .epic drama, and. . .poetic incantation. . . . It was passion and despair that made [Min] fearless; it was fearlessness that made her a writer."
—The New York Times

"Stunning. . . . Min's is a distinct and moving voice speaking out of a cauldron of history."
—Los Angeles Times Book Review

"Brave and heartbreaking."
—The Miami Herald