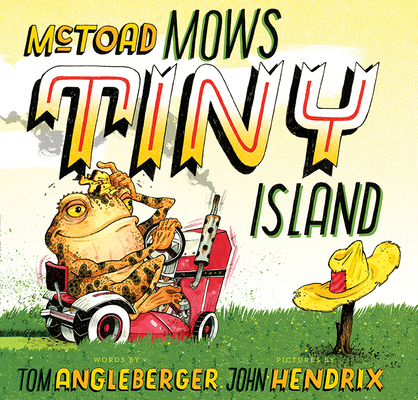 
Backordered. Please call 508.548.5548 for more information.
McToad likes Thursdays. Why? Because on every other day of the week, McToad mows Big Island, but on Thursdays, McToad mows Tiny Island. To do so, he puts his mower on the back of a truck, which drives to a train, which goes to a helicopter, which flies to a boat, which uses a crane to put the lawn mower onto Tiny Island. There McToad mows and drinks some lemonade, and before you know it, it’s time to turn around and go back home. But first, the mower has to get lifted by a crane, to get put back on a boat, which is lifted by a helicopter, and . . . well . . . you get the idea.

From master storyteller Tom Angleberger and celebrated illustrator John Hendrix comes this playful narrative that treasures the journey over the destination, with lots of planes, trains, and automobiles to boot.

Also available by John Hendrix: Miracle Man
Tom Angleberger is the New York Times bestselling author of the Origami Yoda series and the Flytrap Files series, as well as many other books for kids. He lives with his family in Virginia.

John Hendrix is a New York Times–bestselling illustrator and author of many children’s books, including Shooting at the Stars, Miracle Man, and his latest, The Faithful Spy. He is chair of design in the Sam Fox School of Design & Visual Arts at Washington University in St. Louis.
"Hendrix's richly detailed, brightly colored spreads make the book visually engaging."
— Kirkus Reviews

STARRED REVIEW
"Angleberger’s sly charmer is a gift to any reader besotted with engines, motors, and combustible fuel...It’s an unabashed celebration of the pleasure of using big machines to move things around—just because."
— Publishers Weekly

“With large, zany illustrations and rapidly escalating hilarity, this lark of a book is sure to entertain big-machine-loving kids during storytime.”