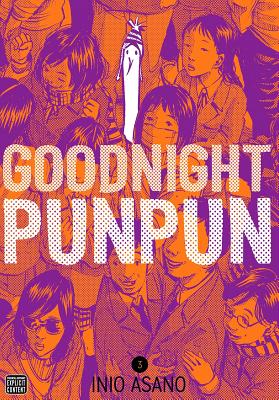 This is book number 3 in the Goodnight Punpun series.

A dark coming-of-age tale where slice-of-life slices back.

This is Punpun Onodera’s coming-of-age story. His parents’ marriage is falling apart. His dad goes to jail, and his mom goes to the hospital. He has to live with his loser uncle. He has a crush on a girl who lives in a weird cult. Punpun tries talking with God about his problems, but God is a jerk. Punpun keeps hoping things will get better, but they really, really don’t.

Like most kids his age, Punpun is in high school.

In fact, he has made it into the best high school in town.

He is such a good student.

He studies so he doesn’t have to think about his life.

Maybe a meteor will crash into Earth and destroy everything.

A guy can wish, Punpun…
Inio Asano, a bona fide earthling, was born in Ibaraki, Japan, in 1980. In 2001, his short story “Uchu kara Konnichiwa” (Hello from Outer Space) won the first Sunday GX Rookie Prize. Later, GX published his series Subarashii Sekai, available in English from VIZ Media as What a Wonderful World! His other works include Hikari no Machi (City of Light), Nijigahara Holograph and Umibe no Onna no Ko (A Girl on the Shore), as well as solanin and Goodnight Punpun, also available from VIZ Media.