The Kingmaker's Daughter (The Plantagenet and Tudor Novels) (Paperback) 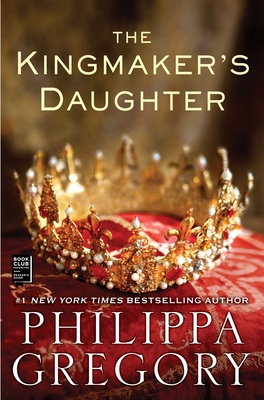 In this New York Times bestseller that inspired the critically acclaimed Starz miniseries The White Queen, Philippa Gregory tells the tale of Anne Neville, a beautiful young woman who must navigate the treachery of the English court as her father, known as the Kingmaker, uses her and her sister as pawns in his political game.

The Kingmaker’s Daughter—Philippa Gregory’s first sister story since The Other Boleyn Girl—is the gripping tale of the daughters of the man known as the Kingmaker, Richard Neville, Earl of Warwick: the most powerful magnate in fifteenth-century England. Without a son and heir, he uses his daughters, Anne and Isabel, as pawns in his political games, and they grow up to be influential players in their own right.

At the court of Edward IV and his beautiful queen, Elizabeth Woodville, Anne grows from a delightful child to become ever more fearful and desperate when her father makes war on his former friends. Married at age fourteen, she is soon left widowed and fatherless, her mother in sanctuary and her sister married to the enemy. Anne manages her own escape by marrying Richard, Duke of Gloucester, but her choice will set her on a collision course with the overwhelming power of the royal family.

“Gregory returns with another sister act. The result: her best novel in years.”
— USAToday.com

“The Kingmaker’s Daughter is Gregory in fine form. . . . The Cousins' War . . . provides a rich setting for drama with its endless plots and conniving courtiers.”
— Associated Press

“Gregory ... always delivers the goods. Her latest novel wraps up her ‘cousins' war’ series of royal witches, philanderers and kingslayers with the story of King Richard III's wife, Anne Neville, who went from the marital bed of one royal prince to that of another king-to-be during this long family feud.”
— New York Post

“From the queen of royal fiction comes a gripping 15th-century tale of the daughters of the man known as the ‘Kingmaker.'"
— San Antonio Express-News

“Conspiracy and a fight to the death for love and power.”
— Los Angeles Times

“Gregory is one of historical fiction’s superstars, and The Kingmaker’s Daughter shows why. . . . providing intelligent escape, a trip through time to a dangerous past.”
— Historical Novels Review (Editor's Choice Review)

“The bonds of sisterhood infuse Gregory’s latest. . . . The stakes are high as Anne and Isabel Neville, daughters of the earl of Warwick (‘The Kingmaker’), vie for their father’s favor and a chance at the throne. . . . . In addition to Gregory handling a complicated history, she convincingly details women’s lives in the 1400s and the competitive love between sisters.”
— Publishers Weekly

“Gregory delivers another vivid and satisfying novel of court intrigue, revenge, and superstition. Gregory’s many fans as well as readers who enjoy lush, evocative writing, vividly drawn characters, and fascinating history told from a woman’s point of view will love her latest work.”
— Library Journal

“It’s every man and woman for themselves in Gregory’s latest, which offers reliable royal entertainment."
— Booklist

“Gregory creates suspense by raising intriguing questions about whether her characters will transcend their historical reputations.”
— Kirkus Reviews