The White Princess (The Plantagenet and Tudor Novels) (Paperback) 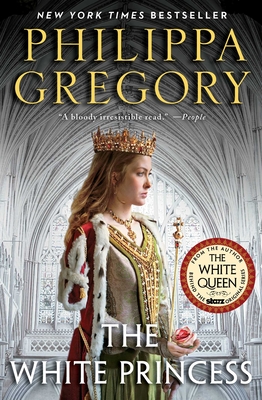 From “queen of royal fiction” (USA TODAY) Philippa Gregory comes this instant New York Times bestseller that tells the story of the remarkable Elizabeth of York, daughter of the White Queen, and mother to the House of Tudor.

When Henry Tudor picks up the crown of England from the mud of Bosworth field, he knows he must marry the princess of the enemy house—Elizabeth of York—to unify a country divided by war for nearly two decades.

But his bride is still in love with his slain enemy, Richard III—and her mother and half of England dream of a missing heir, sent into the unknown by the White Queen. While the new monarchy can win power, it cannot win hearts in an England that plots for the triumphant return of the House of York.

Henry’s greatest fear is that somewhere a prince is waiting to invade and reclaim the throne. When a young man who would be king leads his army and invades England, Elizabeth has to choose between the new husband she is coming to love and the boy who claims to be her beloved lost brother: the rose of York come home at last.

"Loyalties are torn, paranoia festers and you can almost hear the bray of royal trumpets as the period springs to life. It’s a bloody irresistible read."
— People Magazine

“This rich tapestry brings to vivid life the court of Henry and Elizabeth. Meticulously drawn characters with a seamless blending of historical fact and fiction combine in a page-turning epic of a story. Tudor-fiction fans can never get enough, and they will snap this one up.”
— Library Journal (starred review)

"The White Princess features one of the more intriguing theories about the possible fate of the princes."
— The Washington Post

"This is the most fascinating and complex of the series--not only in history, but in the psychological makeup of the characters, the politics of the era and the blending of actual and reimagined history. Gregory makes everything come to life. . . . This is why Gregory is a queen of the genre."
— Romantic Times

“Elizabeth must navigate the treacherous waters of marriage, maternity, and mutiny in an age better at betrayal than childbirth. . . . At this novel’s core lies a political marriage seen in all its complexity.”
— Publishers Weekly

“Gregory returns with another sister act. The result: her best novel in years.”
— USA Today

“Gregory delivers another vivid and satisfying novel of court intrigue, revenge, and superstition. Gregory’s many fans as well as readers who enjoy lush, evocative writing, vividly drawn characters, and fascinating history told from a woman’s point of view will love her latest work.”
— Library Journal

“Gregory is one of historical fiction’s superstars, and The Kingmaker’s Daughter shows why . . . providing intelligent escape, a trip through time to a dangerous past.”
— Historical Novels Review (Editor's Choice Review)

“Wielding magic again in her latest War of the Roses novel … Gregory demonstrates the passion and skill that has made her the queen of English historical fiction.…Gregory portrays spirited women at odds with powerful men, endowing distant historical events with drama, and figures long dead or invented with real-life flaws and grand emotions. She makes history … come alive for readers.”
— Publishers Weekly (starred review)