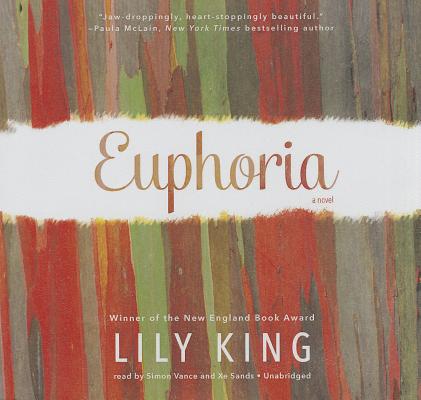 “Loosely based on Margaret Mead's time in Papua New Guinea, this engaging, insightful novel features three young anthropologists in the 1930s who studied the remote, primitive Sepik River tribes. Euphoria is about cutting-edge research and revolutionary ideas, but inevitably it is also about the complications within the scholars' relationships when societal norms are stripped away, and love, greed, jealousy, and control are left unfettered. Artfully narrated, alternating between first person and third person as well as journal entries, King's novel offers a unique view into these rich and complicated characters.”
— Katie McDougall, Parnassus Books, Nashville, TN

“Euphoria is a fascinating historical novel based on a complex woman. Science, culture, and nature collide. The beginnings of the study of anthropology were fraught with peril and make it a great jumping off point for discussion.”
— Valerie Koehler, Blue Willow Bookshop, Houston, TX

From New England Book Award winner Lily King comes a breathtaking novel about three young anthropologists of the 30s caught in a passionate love triangle that threatens their bonds, their careers, and ultimately, their lives.

English anthropologist Andrew Bankson has been alone in the field for several years, studying the Kiona river tribe in the territory of New Guinea. Haunted by the memory of his brothers deaths and increasingly frustrated and isolated by his research, Bankson is on the verge of suicide when a chance encounter with colleagues, the controversial Nell Stone and her wry and mercurial Australian husband Fen, pulls him back from the brink. Nell and Fen have just fled the bloodthirsty Mumbanyo and, in spite of Nell's poor health, are hungry for a new discovery. When Bankson finds them a new tribe nearby the artistic, female-dominated Tam he ignites an intellectual and romantic firestorm between the three of them that burns out of anyone's control.

Set between two World Wars and inspired by events in the life of revolutionary anthropologist Margaret Mead, "Euphoria" is an enthralling story of passion, possession, exploration, and sacrifice from accomplished author Lily King.